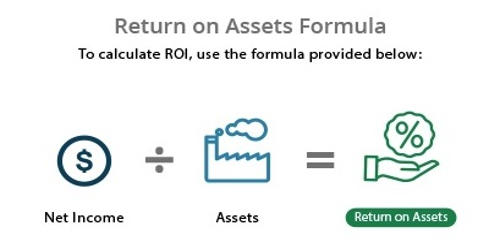 Return on assets is a profitability ratio that provides how much profit a company is able to generate from its assets. The return on assets (ROA) shows the percentage of how profitable a company’s assets are in generating revenue. It is an indicator of how profitable a company is relative to its total assets. It measures the amount of profit a company generates as a percentage relative to its total assets.

ROA gives a manager, investor, or analyst an idea as to how efficient a company’s management is at using its assets to generate earnings. ROA is best used when comparing similar companies or comparing a company to its previous performance. This ratio indicates how well a company is performing by comparing the profit (net income) it’s generating to the capital it’s invested in assets.

ROA can be computed as below:

This number tells you what the company can do with what it has, i.e. how many dollars of earnings they derive from each dollar of assets they control. It’s a useful number for comparing competing companies in the same industry. The higher the return, the more productive and efficient management is in utilizing economic resources. The number will vary widely across different industries. Return on assets is a comparison metric that can be used to examine the past performance of a company or view similar companies side by side.

Return on assets gives an indication of the capital intensity of the company, which will depend on the industry; companies that require large initial investments will generally have a lower return on assets. The ROA formula is an important ratio in analyzing a company’s profitability. The ratio is typically used when comparing a company’s performance between periods, or when comparing two different companies of similar size in the same industry. ROAs over 5% is generally considered good.

Return on assets is one of the elements used in financial analysis using the Du Pont Identity. ROA can give you, investors, or financial analysts an idea of how well your company manages its assets. Your return on assets is a percentage. Your ROA percentage indicates how well your business manages its balance sheet to generate profits. It measures the level of net income generated by a company’s assets.

Measuring ROA has many advantages, such as: