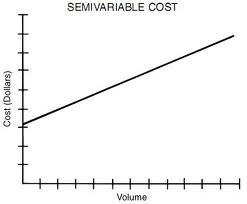 The most common semi-variable expense for manufacturers is electricity. Manufacturing companies rely heavily on machinery to complete production tasks, but the frequency with which that technology is actually put to use will vary with consumer demand and volume of production. Thus, a company will pay a certain amount of money each month to keep a warehouse open (this sum will likely include lighting costs, for example), but portions of this electric bill (i.e. those reflecting the cost to run machines) will increase during particularly busy periods and decrease in downturns. A cost composed of a mixture of fixed and variable components. Costs are fixed for a set level of production or consumption, becoming variable after the level is exceeded.

Also known as a “semi-fixed cost.”

Investopedia Says:
This type of cost is variable in the sense that greater levels of production increase total cost. If no production occurs, then a fixed cost is still incurred.