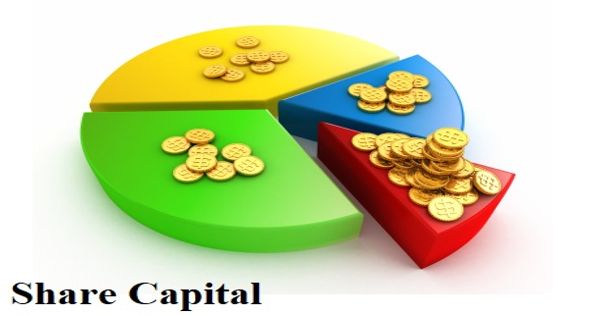 Share capital is money raised by shareholders through the sale of ordinary shares. Buying shares gives the buyer part ownership of the business and therefore certain rights, such as the right to vote on changes to the business.

Share Capital represents the nominal value, currency, and voting particulars associated with the shares in a limited company. The capital can be made of more than one class or denomination of share. A joint-stock company should have capital in order to finance its activities. It raises its capital by issue of shares. The amount of share capital or equity financing a company has can change over time with additional public offerings. The Memorandum of Association must state the amount of capital with which the company is desired to be registered and the number of shares into which it is to be divided. When the total capital of a company is divided into shares, then it is called share capital. It is reported by a company on its balance sheet in the shareholder’s equity section. If two shareholders each have one share then they own 50% of the company as they each own 50% of the total issued share capital. If one shareholder owns three shares and the other owns one share the split is 75% and 25% respectively.

The amount of share capital reported by a company includes only payments for purchases made directly from the company. It constitutes the basis of the capital structure of a company. The later sales and purchases of those shares and the rise or fall of their prices on the open market have no effect on the company’s share capital. In other words, the capital collected by a joint-stock company for its business operation is known as share capital.

The purpose of the share capital is really to enable the company to be divided up in terms of ownership and control. It is the total amount of capital collected from its shareholders for achieving the common goal of the company as stated in the Memorandum of Association. The shareholders are granted options over the shares and the percentage of issued shares they own represents their holding in the company.