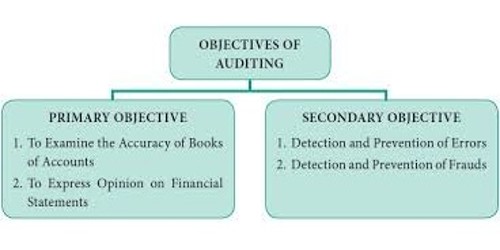 The audit is a critical review of the system of accounting and internal control. The objective of an audit is to express an opinion on financial statements. These are such objectives that are set up to help in attaining primary objectives. In that process, an auditor may come across some errors and frauds. They are as follows:

(i) Detection and prevention of errors

Errors refer to an accidental mistake in the commercial data arising due to ignorance of accounting procedures. Due to the wrong posting, such errors may occur. Errors are those mistakes that are committed due to carelessness or negligence or lack of knowledge or without having vested interest. Detection of errors is, therefore, an essential prerequisite for confirmation of accounts and financial results. Errors may be committed without or with any vested interest. So, they are to be checked carefully. Errors are of various types. Some of them are:

(ii) Detection and prevention of frauds

Frauds are those mistakes that are committed knowingly with some vested interest in the direction of top-level management. Management commits frauds to deceive tax, to show the effectiveness of management, to get more commission, to sell a share in the market or to maintain the market price of a share, etc. Such detec­tion is only possible through a thorough examination of all financial and other con­cerned data. Detection of fraud is the main job of an auditor. Such frauds are as follows:

(iii) Under or overvaluation of the stock

Normally such frauds are committed by the top-level executives of the business. So, the explanation was given to the auditor also remains false. So, an auditor should detect such frauds using skill, knowledge, and facts.