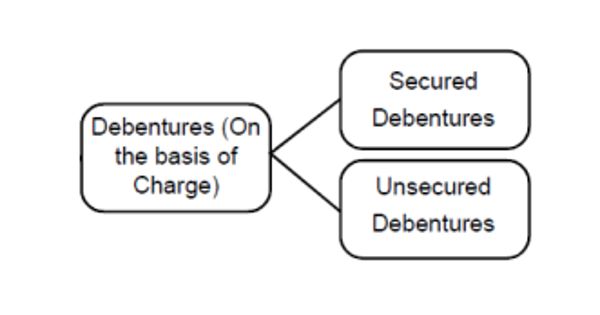 Types of Debentures on the Basis of Security

Debentures can be secured in nature, it may be unsecured in nature. A debenture is a written tool accepting a debt under the general authentication of the enterprise. A secured debenture is secured by the charge on some asset or set of assets which is known as secured or mortgage debenture and another when it is issued solely on the credibility of the issuer is known as the naked or unsecured debenture. It comprises of an agreement for repayment of principal after a particular period or at intermissions or at the option of the enterprise and for payment of interest at a fixed rate due to, usually either yearly or half-yearly on fixed dates. A trustee is appointed for holding the secured asset which is quite obvious as the title cannot be assigned to each and every debenture holder.

Types of Debentures on the Basis of Security

(a) Secured or Mortgage Debentures

Secured debentures are those kinds of debentures where a charge is being established on the properties or assets of the enterprise for the purpose of any payment. These are the debentures that are secured by a charge on the assets of the company. The charge might be either floating or fixed. These are also called mortgage debentures. The fixed charge is established against those assets which come under the enterprise’s possession for the purpose to use in activities not meant for sale whereas the floating charge comprises all assets excluding those accredited to the secured creditors.

The holders of secured debentures have the right to recover their principal amount with the unpaid amount of interest on such debentures out of the assets mortgaged by the company. A fixed charge is established on a particular asset whereas a floating charge is on the general assets of the enterprise. When the floating charge crystallizes, the debenture-holders have a right to be paid out of the sale proceeds of the assets subject to the right of the preferential creditor but prior to making any payment to unsecured creditors.

They do not have a particular charge on the assets of the enterprise. Normally debentures are secured by a mortgage or a charge on the company’s assets. Debentures that do not carry any security with regard to the principal amount of unpaid interest are unsecured debentures. However, a floating charge may be established on these debentures by default. Usually, these types of debentures are not circulated. These are also called simple debentures. They are a mere acknowledgment of a debt due from the company, creating no rights beyond those of unsecured creditors.