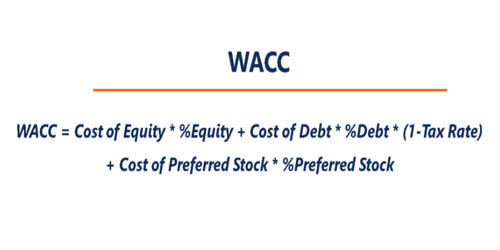 In other words, the weighted average cost of capital is the minimum required rate of return to be earned on an investment. A firm’s WACC increases as the beta and rate of return on equity increase because an increase in WACC denotes a decrease in valuation and an increase in risk. Therefore, it is computed on the basis of the proportion of the funds from which the fund has been raised and their respective proportion.

A firm’s WACC represents its blended cost of capital across all sources, including common shares, preferred shares, and debt. Companies often run their business using the capital they raise through various sources. The cost of each type of capital is weighted by its percentage of total capital and they are added together. They include raising money by listing their shares on the stock exchange (equity), or by issuing interest-paying bonds or taking commercial loans (debt). All such capital comes at a cost, and the cost associated with each type varies for each source. This guide will provide a detailed breakdown of what WACC is, why it is used, how to calculate it, and will provide several examples.