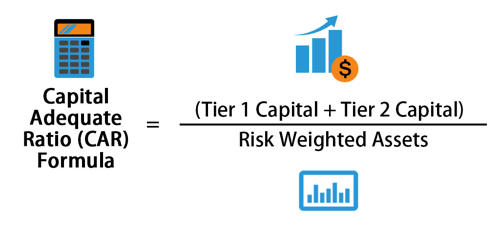 In the banking system, the term “capital adequacy ratio” refers to the assessment of the bank capital to be maintained corresponding to the risk-weighted credit exposures. It is a measure of a bank’s capital. It is expressed as a percentage of a bank’s risk-weighted credit exposures. It is decided by central banks and bank regulators to prevent commercial banks from taking excess leverage and becoming insolvent in the process. The enforcement of regulated levels of this ratio is intended to protect depositors and promote the stability and efficiency of financial systems around the world. It is a measure to find out the proportion of banks capital, with respect to the total risk-weighted assets of the bank.

Capital adequacy ratio is the ratio that determines the bank’s capacity to meet the time liabilities and other risks such as credit risk, operational risk, etc. Banking regulators in most countries define and monitor CAR to protect depositors, thereby maintaining confidence in the banking system.