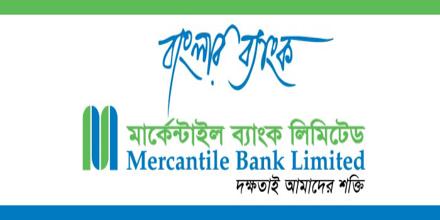 The Authorized Capital of the Bank is BDT 800,000 million and divided into 80,000,000 ordinary shares of BDT 100 each as of 31 December 2009. The Paid -up Capital is BDT 215841 million of 21584134 ordinary shares of face value of BDT 100 each and listed both in DSE & CSE. MBL make it most efficient to meet the needs of the 21st century with assets of BDT 44,940.54 million and more than 1000 employees. The Bank provides a broad range of financial services to its customers and corporate clients in retail banking, corporate banking, and international trade.

The opening of the Principal Office was the big leaf forward and successively the opening of the Mothijil Branch expanded the horizon of Mercantile Bank Limited to bring its services to the valued clients more effectively. The second Branch opened at Dhanmondi Residential Area, Dhaka on August 04, 1999. The third branch was opened at Agrabad, Chittagong on November 06, 1999. The bank stood 58 branches all over the country up to October 2012.

The mission of Mercantile Bank.

The objective of the Study

The specific objective of the study is:

The methodology of the Study

There are mainly four departments of MBL-

In this department, the general Banking activities like- opening account & related information are provided. The general banking in charge of Mercantile Bank Ltd (Dhanmondi Branch) is Md. Mizanur Rahman.

Credit department helps the customers through providing bank loans. There are various types of loans handled by different officers. There are secured loan, unsecured loan, SME loan & Home & other loan facilities. The name of cash in charge is Md. Sharower Islam

Cash section performs the activities of keeping and giving cash to the customer. The person who wants to open an account, have to keep a specific amount of money to the account. Customers can withdraw the cash when the need for a specific period. In cash section, various type of bills like- DESCO bill, ALICO monthly fees are taken from the customers. The name of cash in charge is Md. Kamruzzaman.

Three departments are organized properly to provide the best facilities to the customers.

In today’s competitive business environment, only the quality of human resources makes the difference. The bank’s commitment to attracting the best persons to work for its and the adaptation of the latest technologies is reflected in the efforts of the bank in the development of its human resources. In the face of today’s global competition, the bank envisages to develop the highly motivated workforce and to equip them with latest skills and technologies. A good working environment promotes a level of loyalty and commitment, devotion and dedication on the part of the employees.

The bank sent a number of officers to Bangladesh Institute of Bank Management and the other training institutes for specialized training various aspects of banking. The bank is contemplating to set up “Training Institute” for providing facilities to its executive and officers. The bank believes in professional excellence and considers its working force as its most valuable asset and the basis of its efficiency and strength.

The bank commenced its business on June 02, 1999. The first Branch was opened at 61 Dilkusha Commercial Area on the Inauguration Day of the Bank. The second Branch opened at Dhanmondi Residential Area, Dhaka on August 04, 1999. The third branch was opened at Agrabad, Chittagong on November 06, 1999.Now the total number of branches stood at 58 at the end of the month, October 2012.

A commercial Bank/MBL is involved in financing foreign trade apart from financing internal credit requirement in the economy. This involves handling of import business through opening L/C and handling of export business. As banking has become very keenly competitive, banks find it convenient to involve in foreign exchange business as a lucrative source of earning income and profit.

Apart from financing foreign trade, Commercial Banks also provide guarantees of various types to their clients. While these facilities clients to undertake jobs assigned to them by various corporations and organization, this enables the bank to earn a commission.

Mercantile Bank Limited has different types of the scheme for a customer. These are given below:

Financial ratios can be divided into four basic groups or categories:

Liquidity, activity, and debt ratios primarily measure risk, profitability ratios measure return. In the near term, the important categories are liquidity, activity, and profitability, because these provide the information that is critical to the short-run operation of the firm. Debt ratios are used primarily when the analyst is sure that the firm will successfully weather the short run.

The liquidity of a business firm is measured by its ability to satisfy its short-term obligations as they come due. Liquidity refers to the solvency of the firm’s overall financial position. The three basic measures of liquidity are-

The quick ratio is a much more exacting measure than the current ratio. This ratio shows a firm’s ability to meet current liabilities with its most liquid assets.

Activity ratios measure the speed with which accounts are converted into sale or cash. With regard to current accounts measures of liquidity are generally inadequate because differences in the composition of a firm’s current accounts can significantly affect its true liquidity. A number of ratios are available for measuring the activity of the important current accounts which includes inventory, accounts receivable, and account payable. The activity (efficiency of utilization) of total assets can also be assessed.

The total asset turnover indicates the efficiency with which the firm is able to use all its assets to generate sales.

B Investment to Deposit Ratio:

Investment to Deposit Ratio shows the operating efficiency of a particular Bank in promoting its investment product by measuring the percentage of the total deposit disbursed by the Bank as long & advance or as an investment. The ratio is calculated as follows:

The debt position of that indicates the amount of other people’s money being used in attempting to generate profits. In general, the more debt a firm uses in relation to its total assets, the greater its financial leverage, a term used to describe the magnification of risk and return introduced through the use of fixed-cost financings such as debt and preferred stock.

The debt ratio measures the proportion of total assets provided by the firm’s creditors.

The ratio shows the position of the Bank’s owner’s equity by measuring the portion of total asset financed by the shareholders invested funds and it is calculated as follows:

This ratio measures the ability to meet contractual interest payment that means how much the company able to pay interest on their income.

These measures evaluate the bank’s earnings with respect to a given level of sales, a certain level of assets, the owner’s investment, or share value. Without profits, a firm could not attract outside capital. Moreover, present owners and creditors would become concerned about the company’s future and attempt to recover their funds. Owners, creditors, and Management pay close attention to boosting profits due to the great importance placed on earnings in the marketplace.

The Return on Equity (ROE) measures the return earned on the owners (both preferred and common stockholders) investment. Generally, the higher this return, the better of the owners.

The Price/ Earnings ratio (price-to-earnings ratio) of a stock is a measure of the price paid for a share relative to the income or profit earned by the firm per share. The current ratio, one of the most commonly cited financial ratios, measures the firm’s ability to meet its short-term obligations. The higher the current ratio, the better the liquidity position of the firm. It is expressed as The graph shows an upward trend in MBL’s current ratio. This indicates that MBL’s has increased its liquidity position and thereby it has reduced the change of being technically insolvent.

Networking capital, although not actually a ratio is a common measure of a firm’s overall Liquidity a measure of liquidity ratio calculated by Networking capital measures the liquidity position of the firm. In 2008 the networking capital was Tk 822.34 million which was gradually increased to Tk 2447.97 million in 2012. The graph shows that increasing trend of MBLs liquidity position this indicates that MBL has increased its ability to pay short-term obligation out of its currents assets.

It measures a particular Bank’s operating efficiency by measuring the percent of the total operating income that the Bank spends to operate its daily activities. It is calculated as follows: The total asset turnover indicates the efficiency with which the firm is able to use all its assets to generate income. The firm’s Earning per share (EPS) are generally of interest to present or prospective stockholders and management. The Earning per share represents the number of dollars earned on behalf of each outstanding share of common stock. The earnings per share are calculated as follows. The graph shows that EPS is highest in 2008 and there is a downward trend in EPS from the year 2008 to 2010. But MBL has managed to increase its EPS as shown by the upward trend in EPS. Over the last three years.

While working at MBL Dhanmondi Branch, I have got some new experience and examine different problems. These problems that I identify completely from my personal point of view which are given below.

Mercantile Bank Limited (MBL) is setting new standards in the banking arena in the time of turbulent economic conditions. As part of the long-term financial reform and modernization plan of the government, the bank had been converted into a public limited company. The bank is a financial intermediary that collects money as the deposit from idle section i.e. household by providing interest against deposit and mobilize this money into the productive sector i.e. industry, agriculture, manufacturing from by collecting interest against the loan. The difference between interest expense and interest gain is the bank’s main profit. In banking language, it is called spread. Without a bank, an economic development cannot be imagined. The mercantile bank one of the leading banks in our country that also plays a vital role undoubtedly. In 2010 the Mercantile Bank total deposit was (75629.14) million and provide the loan (66377.70) million. Mercantile bank collect deposit by providing different types attracting deposit product and provide loan by offering different types of investment product. In developing economic condition mercantile bank has the huge contribution i.e. in 2010 the contribution was in garments sector (11,211,457,626), agriculture sector (2,038,915,000), government sector (9,565,346,007). So it can be said that Mercantile Bank plays a very important role in economic development.