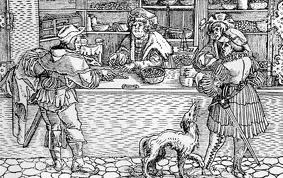 When money became an accepted medium of exchange, the need arose to keep the money safe. In addition, some people needed to borrow money. These needs led to the development of banks. The earliest banking records, dated around 2000 B.C., indicate that Babylon had a highly developed banking system. Babylonian banks were not unlike the banks of today, except that you might say they had a monopoly. Many years later, in the sixth century B.C., the first private bank emerged-the Igibi bank.

Like today’s bank, it accepted for deposit money on which it paid interest. It also lent money to persons who needed the money for worthwhile purposes and who repaid the borrowed funds with interest. By the fourth century B.C., Greece was the dominant nation in the world. Private and city-state-owned banks existed in the outlying lands of the Greek Empire, but only privately owned banks were allowed in Greece. Government to a great extent regulated those banks; however, Rome then became the dominant empire. Under early Roman law, banks could only be privately owned, but they were regulated by law. With the fall of the Roman Empire, banking became essentially illegal until the third century A.D. By the fourteenth century, when trade routes were being developed, privately owned banks were once again allowed. And by the fifteenth century, banks were needed to advance the huge sums of money required to send out ships to bring back valuable commodities such as spices, silk and gold. At this time in history, banking was big business

The banking system at independence consisted of two branch offices of the former State Bank of Pakistan and seventeen large commercial banks, two of which were controlled by Bangladeshi interests and three by foreigners other than West Pakistanis. There were fourteen smaller commercial banks. Virtually all banking services were concentrated in urban areas. The newly independent government immediately designated the Dhaka branch of the State Bank of Pakistan as the central bank and renamed it the Bangladesh Bank. The bank was responsible for regulating currency, controlling credit and monetary policy, and administering exchange control and the official foreign exchange reserves. The Bangladesh government initially nationalized the entire domestic banking system and proceeded to reorganize and rename the various banks. Foreign-owned banks were permitted to continue doing business in Bangladesh. The insurance business was also nationalized and became a source of potential investment funds. Cooperative credit systems and postal savings offices handled service to small individual and rural accounts. The new banking system succeeded in establishing reasonably efficient procedures for managing credit and foreign exchange. The primary function of the credit system throughout the 1970s was to finance trade and the public sector, which together absorbed 75 percent of total advances.

The government’s encouragement during the late 1970s and early 1980s of agricultural development and private industry brought changes in lending strategies. Managed by the Bangladesh Krishi Bank, a specialized agricultural banking institution, lending to farmers and fishermen dramatically expanded. The number of rural bank branches doubled between 1977 and 1985, to more than 3,330. Denationalization and private industrial growth led the Bangladesh Bank and the World Bank to focus their lending on the emerging private manufacturing sector. Scheduled bank advances to private agriculture, as a percentage of sectoral GDP, rose from 2 percent in FY 1979 to 11 percent in FY 1987, while advances to private manufacturing rose from 13 percent to 53 percent.

The transformation of finance priorities has brought with it problems in administration. No sound project-appraisal system was in place to identify viable borrowers and projects. Lending institutions did not have adequate autonomy to choose borrowers and projects and were often instructed by the political authorities. In addition, the incentive system for the banks stressed disbursements rather than recoveries, and the accounting and debt collection systems were inadequate to deal with the problems of loan recovery. It became more common for borrowers to default on loans than to repay them; the lending system was simply disbursing grant assistance to private individuals who qualified for loans more for political than for economic reasons. The rate of recovery on agricultural loans was only 27 percent in FY 1986, and the rate on industrial loans was even worse.

As a result of this poor showing, major donors applied pressure to induce the government and banks to take firmer action to strengthen internal bank management and credit discipline. As a consequence, recovery rates began to improve in 1987. The National Commission on Money, Credit, and Banking recommended broad structural changes in Bangladesh’s system of financial intermediation early in 1987, many of which were built into a three-year compensatory financing facility signed by Bangladesh with the IMF in February 1987.

One major exception to the management problems of Bangladeshi banks was the Grameen Bank, begun as a government project in 1976 and established in 1983 as an independent bank. In the late 1980s, the bank continued to provide financial resources to the poor on reasonable terms and to generate productive self-employment without external assistance. Its customers were landless persons who took small loans for all types of economic activities, including housing. About 70 percent of the borrowers were women, who were otherwise not much represented in institutional finance.

Collective rural enterprises also could borrow from the Grameen Bank for investments in tube wells, rice and oil mills, and power looms and for leasing land for joint cultivation. The average loan by the Grameen Bank in the mid-1980s was around Tk2, 000 (US$65), and the maximum was just Tk18, 000 (for construction of a tin-roof house). Repayment terms were 4 percent for rural housing and 8.5 percent for normal lending operations.

The Grameen Bank extended collateral-free loans to 200,000 landless people in its first 10 years. Most of its customers had never dealt with formal lending institutions before. The most remarkable accomplishment was the phenomenal recovery rate; amid the prevailing pattern of bad debts throughout the Bangladeshi banking system, only 4 percent of Grameen Bank loans were overdue. The bank had from the outset applied a specialized system of intensive credit supervision that set it apart from others. Its success, though still on a rather small scale, provided hope that it could continue to grow and that it could be replicated or adapted to other development-related priorities. The Grameen Bank was expanding rapidly, planning to have 500 branches throughout the country by the late 1980s.

Beginning in late 1985, the government pursued a tight monetary policy aimed at limiting the growth of domestic private credit and government borrowing from the banking system. The policy was largely successful in reducing the growth of the money supply and total domestic credit. Net credit to the government actually declined in FY 1986. The problem of credit recovery remained a threat to monetary stability, responsible for serious resource misallocation and harsh inequities. Although the government had begun effective measures to improve financial discipline, the draconian contraction of credit availability contained the risk of inadvertently discouraging new economic activity.

Foreign exchange reserves at the end of FY 1986 were US$476 million, equivalent to slightly more than 2 months worth of imports. This represented a 20-percent increase of reserves over the previous year, largely the result of higher remittances by Bangladeshi workers abroad. The country also reduced imports by about 10 percent to US$2.4 billion. Because of Bangladesh’s status as a least developed country receiving concessional loans, private creditors accounted for only about 6 percent of outstanding public debt. The external public debt was US$6.4 billion, and annual debt service payments were US$467 million at the end of FY 1986.

Limited, the first private sector bank was incorporated in Bangladesh on 31st December 1981 as Arab Bangladesh Bank Limited and started its operation with effect from April 12, 1982. AB Bank is known as one of leading bank of the country since its commencement 28 years ago. It continues to remain updated with the latest products and services, considering consumer and client perspectives. AB Bank has thus been able to keep their consumer’s and client’s trust while upholding their reliability, across time.

During the last 28 years, AB Bank Limited has opened 77 Branches in different Business Centers of the country, one foreign Branch in Mumbai, India and also established a wholly owned Subsidiary Finance Company in Hong Kong in the name of AB International Finance Limited. To facilitate cross border trade and payment related services, the Bank has correspondent relationship with over 220 international banks of repute across 58 countries of the World. In spite of adverse market conditions, AB Bank Limited which turned 28 this year, concluded the 2009 financial year with good results. The Bank’s consolidated profit after taxes amounted to Taka 3300 cr which is 43.44% higher than that of 2008. The asset base of AB grew by 27.20% from 2008 to stand at over Tk 10691 cr as at the end of 2009.

The Bank maintained its sound credit rating in 2009 to that of the previous year. The Credit Rating Agency of Bangladesh Limited (CRAB) awarded the Bank an AA3 rating in the long term and ST-1 rating in the short Term.

AB Bank believes in modernization. The bank took a conscious decision to rejuvenate its past identity – an identity that the bank carried as Arab Bangladesh Bank Limited for twenty five long years. As a result of this decision, the bank chose to rename itself as AB Bank Limited and the Bangladesh Bank put its affirmative stamp on November 14, 2007.The Bank decided to change its traditional color and logo to bring about a fresh approach in the financial world; an approach, which like its new logo is based on bonding, and trust. The bank has developed its logo considering the contemporary time. The new logo represents our cultural “Sheetal pati” as it reflects the bonding with its clientele and fulfilling their every need. Thus the new spirit of AB is “Bonding”. The Logo of the bank is primarily “red”, as red represents velocity of speed and purity. Our new logo innovates, bonding of affiliates that generate changes considering its customer demand. AB Bank launched the new Logo on its 25th Anniversary year.

AB Bank commits to nation to take a lead in the Banking sector through not only its strong financial position, but also through innovation of products and services. It also ensures creating higher value for its respected customers and shareholders. The bank has focused to bring services at the doorstep of its customers, and to bring millions into banking channels those who are outside the mainstream banking arena. Innovative products and services were introduced in the field of Small and Medium Enterprise (SME) credit, Women’s Entrepreneur, Consumer Loans, Debit and Credit Cards (Local & International), ATMs, Internet and SMS Banking, Remittance Services, Treasury Products and Services, Structured Finance for Corporate, strengthening and expanding its Islamic Banking activities, Investment Banking, specialized products and services for NRBs, Priority Banking, and Customer Care. The Bank has successfully completed its automation project in mid 2008. It envisages enabling customers to get banking services within the comfort of their homes and offices.

AB Bank has continuously invests into its biggest asset, the human resource to drive forward with its mission “to be the best performing bank in the country.” The bank has introduced Dress Code for its employees. Male employees wear designed ties and females wear Sharee or Salwar Kamiz, all the dresses are consisted with the unique AB Bank logo. AB is recognized as the people’s choice, catering to the satisfaction of its cliental. Their satisfaction is AB’s success.