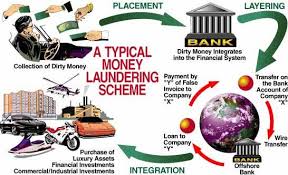 The Money Laundering Prevention Act 2002 received the consent of President to became a law on 5 April 2002. The act was amended in 2003(BB, 2003). The act understands ‘Money Laundering’ as illegally earning or gaining resources directly or indirectly and as perpetrating or assisting in illegal transfer, conversion or concealing position of legal or illegal resources earned or gained directly or indirectly. Responsibilities and powers of BB in prevention: The BB is entrusted with the responsibility of suppressing and preventing money laundering crimes by implementing the act. Bangladesh Bank has an Anti-Money Laundering Department who has the following responsibilities:

Supervise and observe activities of banks, financial institutions and other bodies involved in financial activities;

Calling up report on money laundering from banks, financial institutions and other bodies involved in financial activities;

Train officers and staffs of banks, financial institutions and other bodies involved in financial activities; and

Conducting other activities required for fulfilling the objectives of the act.

International agreements: The act provides scope for entering into agreements with foreign governments to fulfill its objectives. After it came into being, Bangladesh was approached by Thailand last year for an agreement to prevent inter-state money laundering. But that agreement stipulated for existence of Financial Intelligence Unit (FIU) which Bangladesh is yet to have.

Formation of FIU is currently under active consideration of government. Evaluation: Bangladesh is the first South Asian nation to have specific law for prevention of money laundering and money laundering court for trial of such cases. Pakistan and Sri Lanka is yet to establish such specialized laws and courts to deal with money laundering. India has framed money laundering law in 2003. Since introduction of the act, BB received around 300 complaints of money laundering. After investigation, 17 of them turned out to be criminal offences. All 17 cases are currently under trial. However, in general, prosecution process in Bangladesh is extremely slow paced. In many instances, cases remain unresolved for decades. For effective implementation, prosecution process has to be streamlined, of course, maintaining due course of law.

The modes of transfer of remittance are as follows:

The expatriates sent instant draft through courier or any friend or family member who will visit to the home country.  The expatriate sent money through electronic fund transfer process. It may be through swift or it may be through E-Mail. The contracted exchange house or bank help the expatriate to sent the remittance to the country by taking some service charge.

SWIFT: Wage earners branch of AB Bank Ltd. get the message file from remittance sending country. The message file is then decrypted and process through swift.

MODEM TO MODEM: Specially SECI of AB Bank Ltd send the remittance through their host modem and the other modem of SECI section of Head Office, AB Bank Ltd trace the remittances send by the SECI, New York, USA.

E-MAIL: After receiving the mail from foreign country from where the contracted exchange houses or banks send the remittance through E-Mail to wage earners corporate branches or concerned branch of AB Bank Ltd. Then the responsible officer process the encrypted file and the remittance file send to the  Concerned principal offices or corporate branches and they process the file through RMS program by taking print out of transfer responding advice/voucher and the responsible officer credited the remittance to the beneficiaries account.