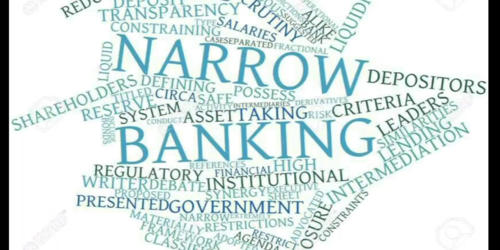 Banking is the acceptance of deposits from the public for the purpose of lending to the borrowers and for investing in securities. Narrow banking is a proposed type of bank called a narrow bank also called a safe bank. It is a term used to describe a very restricted form of banking, where the institution is not allowed to take risks by giving fresh loans to business. Narrow banks are safe banks. By not lending, and using their deposits to buy government bonds, they carry virtually no credit risk.

Narrow banking would restrict banks from holding liquid and safe government bonds. It is a financial institution that issues demandable liabilities and invests in assets that have little or no nominal interest rate and credit risk. Loans would be made by the other financial intermediaries. That is, the deposit-taking and payment activities would be separated from financial intermediation activities. In this concept, the deposit activity and lending activity are treated as different financial streams, so that the deposits are not at risk. It involves mobilizing the large part of the deposits in Risk-Free assets such as Government Securities.

Many prominent economists and policymakers believe that narrow banks should play a greater role in a reformed financial system. Narrow banking is one that is more interested in utilizing the funds received by means of deposits in investing government securities rather than using for lending purposes. The idea is that the bank does not build up fresh bad loans. But since the returns on government securities are very low, the bank will either have to compensate by bringing down its operating costs sharply or by getting additional capital to make up for the shortfall.

Proponents of narrow banking have this to say: