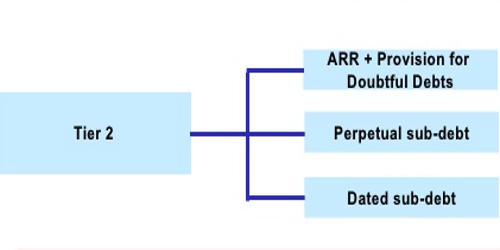 Tier 2 capital includes a number of important and legitimate constituents of a bank’s capital requirement. It is designated as supplementary capital and is composed of items such as revaluation reserves, undisclosed reserves, hybrid instruments, and subordinated term debt. It is the secondary layer of a bank’s capital held as required reserves. These forms of banking capital were largely standardized in the Basel I accord, issued by the Basel Committee on Banking Supervision and left untouched by the Basel II accord. Tier 2 capital is comprised of revaluation reserves, general provisions, subordinated term debt, and hybrid capital instruments. National regulators of most countries around the world have implemented these standards in local legislation. In the calculation of regulatory capital, Tier 2 is limited to 100% of Tier 1 capital. Tier 2 capital is considered less secure than Tier 1 capital, and in the United States, the overall bank capital requirement is partially based on the weighted risk of a bank’s assets. Tier 2 capital is used to determine a bank’s capital adequacy ratio (CAR) – a measure of a bank’s ability to absorb losses.

Revaluation reserve is capital earned when the revaluation of an asset leads to it gaining value compared to its previously determined value. The reserve may arise out of a formal revaluation carried through to the bank’s balance sheet, or a notional addition due to holding securities in the balance sheet valued at historic cost. Basel II also requires that the difference between the historic cost and the actual value be discounted by 55% when using these reserves to calculate Tier 2 capital.