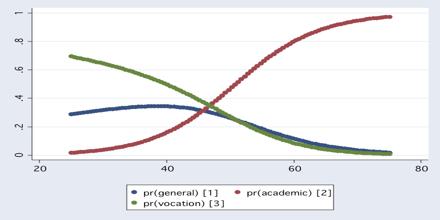 Multinomial Logistic Regression is used to describe data and to explain the relationship between one dependent nominal variable and one or more continuous-level independent variables. It is the linear regression analysis to conduct when the dependent variable is nominal with more than two levels. Thus it is an extension of logistic regression, which analyzes binary dependents. Multinomial Logistic Regression is a simple extension of binary logistic regression that allows for more than two categories of the dependent or outcome variable. It is often considered an attractive analysis because; it does not assume normality, linearity, or homoscedasticity.