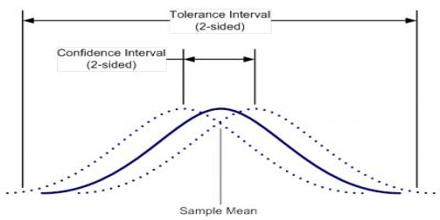 Tolerance Interval use in manufacturers frequently to detect excessive variation by comparing client requirements to tolerance limits that cover an acceptable proportion of the population.This procedure calculates one-, and two-, sided tolerance intervals based on either a distribution-free method or a method based on a normality assumption. A two-sided it consists of two limits between which a given proportion β of the population falls with a given confidence level 1−α . A one-sided tolerance interval is similar, but consists of a single upper or lower limit.