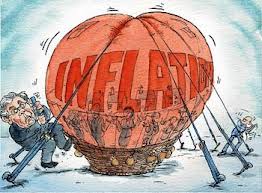 By inflation in ordinary language, we mean a process of rising price. A situation is described as inflationary when either the prices or the supply of money are rising, because in practice both will rise together. In the Keynesian sense, true inflation begins when the elasticity of supply of output in response to increase in money supply has fallen to zero or when output is unresponsive to changes in money supply. When there exists a state of full employment the conditions will be clearly inflationary, if there is increase in the supply of money. But since we do not subscribe to the classical view that there is full employment, we can say that when money supply increases it results partly in the increase of output (GNP) and it partly feeds the rise in prices. And when the supply of output lags far behind, the rise in prices is described as inflationary. In Coulborn’s words, it is a case of “too much money chasing too few goods”. Thus, inflation is generally associated with an abnormal increase in the quantity of money resulting in abnormal rise in price.

Inflation is as old as market economies. Over the long haul, prices have generally risen, as the blue line reveals. Real wages meandered along until the industrial revolution. The real wage have climbed steadily since around 1800, rising than tenfold. Until 1945, the pattern was regular; price would soar during wartime and then fall back during the postwar slump. But the pattern changed dramatically after World War II. Prices and wages how travel on a one-way street upward. They rise rapidly in periods of economic expansion in recessions they do not fall but merely rise less rapidly.

Low inflation is characterized by that rise slowly and predictably, we might define this as single-digit annual inflation rates. When prices are relatively stable, people trust money. They are willing to hold on to money because it will be almost as valuable in a month or a year as it is today. People are willing to rite long-term contracts in money terms because they are confident that the relative prices of goods they buy and sell will not get too far out of line. Most industrial countries have experienced low inflation over the last year.

Inflation in the double or triple digit range of 20, 100, or 200 percent a year is called galloping inflation. From time to time advanced industrial countries like Italy or Japan suffer from these syndromes. Many Latin American countries, such as Argentina and Brazil, had inflation rates of 50 to 7001 percent per year the 1970s and 1980s. Once galloping inflation become entrenched, serious economic distortions arise. Generally, most contracts get indexed to a price index or to a foreign currency, like the dollar. In these conditions, money loses its value quickly, so people hold only the bare minimum amount of needed for the daily transactions. Financial markets wither away, as capital flees abroad. People hoard goods, buy houses, and never, never lend money at low nominal interest rate. A surprising finding is that economies with galloping inflation often manage to grow rapidly even though the price system is behaving so badly.

While economies seem to survive under galloping inflation, a third and deadly strains takes hold when the cancer of hyperinflation strikes. Nothing good can be said about a market economy in which prices are rising a million or even trillion percent per year. The most thoroughly documented case of hyperinflation took place in the W.R. Germany in the 1920s. Studies have found some common features of hyperinflation:-

There is huge variation in relative price and real wage.

The causes of inflation can be grouped into two groups: –

One is increase in demand, which is due to

Increase in community’s aggregate spending on consumptions and investment goods

Increase in salaries wages or dearness allowance and

Another one is no corresponding increase in the output of goods and service, which may be due to

Scarcity of other complementary factors of production that is skilled labor, essential raw material or lack of dynamic entrepreneurs

Increase in exports for earning the required foreign exchange

Speculative hoarding by the produce, traders and middlemen in anticipation of a further rise in price

Drought famine or any other natural calamity adversely a affecting agricultural production and prolonged industrial unrest resulting in reduction of industrial production.

Impact of inflation on Income and Wealth

The major distribution impact of inflation arises from difference in the kinds of assets and liabilities that people hold. When people owe money, a sharp rise in prices is a windfall gain for them. Suppose you borrow 100000 TK. To buy a house and your annual interest rate is fixed and it is 10000 TK pre years. Suddenly, a great inflation doubles all income or earnings. Your nominal mortgage payment is still 10000 TK per year, but its real cost halved. You will need to work only half as long as before to make your mortgage payment. The great inflation has increased your wealth by cutting in half the real value of your mortgage debt. If you are lender and gave assets in fixed interest rate mortgage or long-term bonds, the shoe in is on the other foot. An unexpected rise in price will leave you the poorer because the dollars repaid to you are worth much less than the dollars you lent. If inflation persists for a long time, people come to anticipate it and markets begin to adapt. An allowance for inflation will gradually be built into the market interest rate.

How costly is it to stop inflation:

We asked at the outset of this section how the United States reached such high inflation rates in the early eighties and why policymakers didn’t stop inflation sooner. The answer is easy for the first part; there was not enough political will or enough of a consensus to undertake a decisive attack on inflation. This was so, in good part, because people still remember the Great Depression, with its mass unemployment and terrible nationwide despair and social unrest. The legacy of the s favors high employment. But once the government is committed to high employment levels, she is little hope for stopping inflation once and for all. We have discussed the role of politics, credibility, long-term wage contract, and expectations as standing in the way of inflation stabilization. The basic lesson from the U.S. economy through the seventies suggested that the unemployment costs of bringing down inflation, without any help from favorable supply shocks, would be enormous. The question of how large a recession would be needed to stop inflation was certainly and important one to ask in the early 1980s, when inflation was in the double digit range and presented itself as the foremost policy challenge. Some estimates of the cost of fighting inflation were overwhelming, suggesting that to get inflation from 10 percent down to zero would take more than 10 year and that unemployment would have to increase to 10 percent and stay high for many years in order to achieve this. These estimates would not, of course, encourage a policy of inflation fighting. And yet, over the 1981-1986 periods the United States achieved an impressive disinflation. How can we account for the willingness of policymakers to take the risk and how do we explain their success.

This represents a situation where the basic factor at work is the increase in demand for resources either from the government or the entrepreneurs or the households. The result is that the pressure of demand is such that it cannot be met by the currently available supply of output. If, for example, in a situation of full employment, the government expenditure or private investment goes up this is bound to generate an inflationary pressure in the economy.

We can visualize a situation where even though there is no increase in aggregate demand, prices may still rise this may happen if the costs, particularly the wage costs, go on rising. Now as the level of employment increase, the demand for workers rises progressively so that the bargaining position of the workers is enhanced. To exploit this situation, they may ask for an increase in wage rates, which are not justifiable either on grounds of a prior rise in productivity or of cost of living. The employers in a situation of high demand and employment are more agreeable to concede to these wage claims because they hope to pass on these rises in costs to the consumers in the shape of higher prices. If this happens we have another inflationary factor at work.