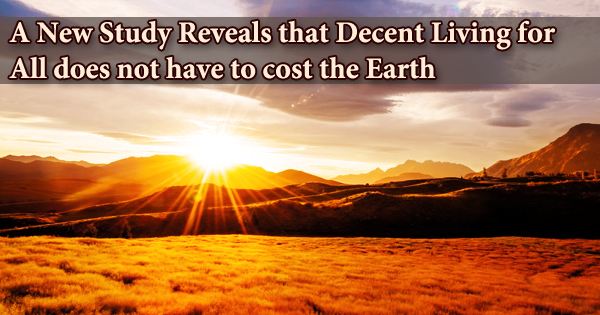 According to new research, with less than 40% of today’s global energy, a reasonable living quality could be given to the whole global population of 10 billion people by 2050. If current trends continue, this is about 25% of the International Energy Agency’s estimate. The current level of global energy consumption is similar to that of the 1960s when the world’s population was just three billion people.

According to recent research, global energy consumption in 2050 may be lowered to 1960s levels while still providing an acceptable quality of life for a population three times bigger. The energy resource required for everyone to have decent living standards in 2050, as defined by meeting all of their basic human needs such as shelter, mobility, food, and hygiene, as well as having access to modern, high-quality healthcare, education, and information technology, according to a study led by the University of Leeds.

The current level of global energy consumption is similar to that of the 1960s when the world’s population was just three billion people. The authors stress that accomplishing this will need major shifts in existing consumption patterns, broad adoption of new technology, and the eradication of massive global disparities.

However, the findings not only show that the energy required to provide a decent living can most likely be met entirely by clean sources, but they also provide a firm rebuttal to reactive claims that reducing global consumption to sustainable levels necessitates a “return to the dark ages” by eliminating modern comforts.

The authors’ tongue in cheek response to the critique that sweeping energy reform would require us all to become ‘cave dwellers’ was: “Yes, perhaps, but these are rather luxurious caves with highly efficient facilities for cooking, storing food and washing clothes; the bigger caverns provide universal healthcare and education to all 5-19-year-olds, as well as moderate temperatures maintained throughout the year and computer networks, among other things.”

The study determined the minimum direct and indirect final energy requirements for satisfactory living conditions. Final energy refers to the energy supplied to the consumer’s door, such as heating, electricity, or gasoline for a car, rather than the energy inherent in the fuels themselves, most of which is wasted at power plants in the case of fossil fuels.

The team created a final energy model based on a list of essential material demands that underlie human well-being that Narasimha Rao and Jihoon Min had previously devised.

The study compared current final energy consumption across 119 countries to the estimates of final energy needed for decent living and found the vast majority of countries are living in significant surplus. In countries that are today’s highest per-capita consumers, energy cuts of nearly 95% are possible while still providing decent living standards to all.

Study lead author Dr Joel Millward-Hopkins from the School of Earth and Environment at Leeds said: “Currently, only 17% of global final energy consumption is from non-fossil fuel sources. But that is nearly 50% of what we estimate is needed to provide a decent standard of living for all in 2050.”

“Overall, our findings confirm long-held claims that technology options to help lowering energy use to a sustainable level currently exist. What we add is that the tangible sacrifices required to achieve these savings are considerably less than many popular tales suggest.”

Professor Julia Steinberger, a co-author of the study and the leader of the Living Well Within Limits project at the University of Leeds and a professor at the Université de Lausanne in Switzerland, said: “While government officials are leveling charges that environmental activists ‘threaten our way of life’ it is worth re-examining what that way of life should entail. There has been a tendency to simplify the idea of a good life into the notion that more is better.”

“Providing a good living for everyone while also safeguarding our climate and ecosystems is definitely within our reach.”

Study co-author Professor Narasimha Rao from Yale University said: “This study also backs up our prior results on a global scale, namely that eliminating poverty is not a barrier to climate stabilization, but rather the pursuit of unbridled prosperity throughout the world.”

Study co-author Yannick Oswald, PhD researcher at the School of Earth and Environment at Leeds said: “To avert ecological collapse, substantial and difficult societal reforms are required at all levels, from the individual to the institutional, and from supply to demand.”