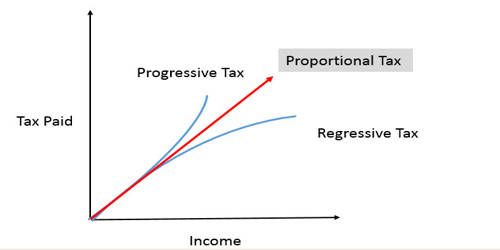 A progressive tax is a tax in which the tax rate increases as the taxable amount increases. It imposes a higher rate on the rich than on the poor. It’s based on the taxpayer’s income or wealth. It is a tax that imposes a lower tax rate on low-income earners compared to those with a higher income, making it based on the taxpayer’s ability to pay. The term “progressive” refers to the way the tax rate progresses from low to high, with the result that a taxpayer’s average tax rate is less than the person’s marginal tax rate. That means it takes a larger percentage from high-income earners than it does from low-income individuals. It is one that charges a higher tax rate for people who earn a higher income. The term can be applied to individual taxes or to a tax system as a whole; a year, multi-year, or a lifetime. Progressive taxes are imposed in an attempt to reduce the tax incidence of people with a lower ability to pay, as such taxes shift the incidence increasingly to those with a higher ability-to-pay. The overall effect is that people with higher incomes pay higher taxes. The opposite of a progressive tax is a regressive tax, where the average tax rate or burden decreases as an individual’s ability to pay increases. These rates are based on the concept that high-income taxpayers can afford to pay a high tax rate.

A progressive tax imposes a greater tax rate on higher-income brackets. The progressive tax system ensures that all taxpayers pay the same rates on the same levels of taxable income. The term is frequently applied in reference to personal income taxes, in which people with lower income pay a lower percentage of that income in tax than do those with higher income. Critics of progressive taxes consider them to be discriminatory against wealthy people or high-income earners. It can also apply to adjustments of the tax base by using tax exemptions, tax credits, or selective taxation that creates progressive distribution effects. For example, a wealth or property tax, a sales tax on luxury goods, or the exemption of sales taxes on basic necessities, may be described as having progressive effects as it increases the tax burden of higher-income families and reduces it on lower-income families. In a progressive tax system, a taxpayer’s marginal tax rate is higher than their average tax rate.

Progressive taxation is usually segmented into tax brackets that progress to successively higher rates. It is often suggested as a way to mitigate the societal ills associated with higher income inequality, as the tax structure reduces inequality, but economists disagree on the tax policy’s economic and long-term effects. It is a tax rate that increases as the taxable value goes up. One study suggests progressive taxation can be positively associated with happiness, the subjective well-being of nations, and citizen satisfaction with public goods, such as education and transportation. For example, a progressive tax rate may move from 0% to 45%, from the lowest and highest brackets, as the taxable amount increases.