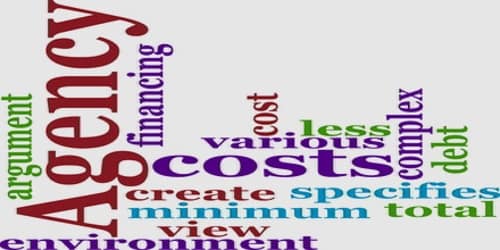 Agency costs are the costs of disagreement between shareholders and business managers, who may not agree on which actions are best for the business. Managers, instead, would prefer to expand the business and increase their salaries, which may not necessarily increase share value. It is an economic concept concerning the fee to a “principal” (an organization, person or group of persons) when the principal chooses or hires an “agent” to act on its behalf. Agency costs really take their toll on a company’s share price when there is substantial debt involved. Shareholders and bondholders have severe conflicts of interest, but shareholders have administrative power. They will pursue selfish strategies which will impose agency costs and lower the market value of the whole firm.

Though they are difficult for an accountant to track, agency costs are difficult to avoid as principals and agents can have separate motivations. Management can have more information than shareholders and can take advantage of their decision-making power over the company.

A non-financial way to consider agency costs is often the conflict of interest between voters and politicians. Voters select their representatives to act in their best interests, but the representatives gain the law-making power and will often act to maintain their positions of power instead of to fulfil their promises to constituents.