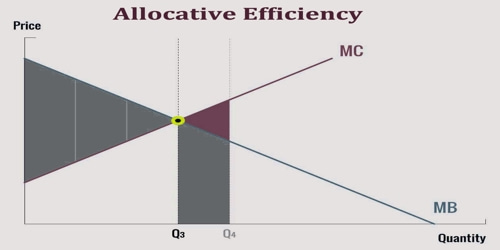 Allocational efficiency is a characteristic of an efficient market in which capital is allocated in a way that is most beneficial to the parties involved. It is a state of the economy in which production represents consumer preferences; in particular, every good or service is produced up to the point where the last unit provides a marginal benefit to consumers equal to the marginal cost of producing. Allocative efficiency is the main tool of welfare analysis to measure the impact of markets and public policy upon society and subgroups being made better or worse off.

Allocational efficiency occurs when there is an optimal distribution of goods and services, taking into account the consumer’s preferences. It also means management across the economy is deploying resources in the most efficient manner to match customer preferences.

This state, where no one can be made better off without making someone else worse off, is very clearly not the socially optimal state.  It is better than a corresponding un-Pareto-optimal state, by definition, but to say that a state is Pareto-optimal is very different from saying anything about the desirability of the social situation.

The basic principle of allocative efficiency is that it guarantees a proper allocation of resources based on the needs and wants of consumers. In economic terms, the allocative efficiency represents the utility derived from the consumption of a good or a service with respect to a certain level of price. Therefore, both producers and consumers benefit. When a market fails to allocate resources efficiently, there is said to be the market failure. Market failure may occur because of imperfect knowledge, differentiated goods, concentrated market power (e.g., monopoly or oligopoly), or externalities.