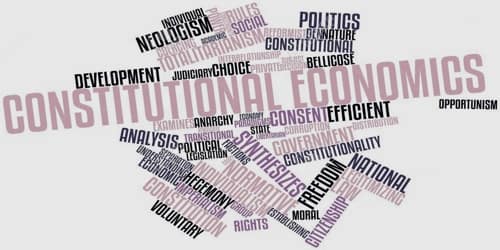 Constitutional Economics emerged in the 1980’s as a field of economic study investigating the economic conditions as they are constructed and constrained within the framework of a state’s constitution. Constitutional economics principles are used to estimate how a country or political system will grow economically, since a constitution limits what activities individuals and businesses can legally participate in.

The term “constitutional economics” was created in 1982 by the U.S. economist Richard McKenzie. Then it was used by another American economist – James M. Buchanan – as a name for a new academic sub-discipline. Buchanan’s work brought him in 1986 the Nobel Prize in Economic Sciences for his “development of the contractual and constitutional bases for the theory of economic and political decision-making.”

Constitutional economics is usually seen as a direct descendant of public choice theory, which originates in the 19th century and concerns itself with the ways economic tools organize and influence political behavior.

Principles of public choice theory are often invoked when explaining the economic decisions of governing bodies which seem in conflict with the desires of a democratic electorate, such as pork-barrel projects and the engagement of political lobbyists.

In addition to Buchanan, many public choice theorists have been awarded Nobel Prizes in Economics, including George Stigler in 1982, Gary Becker in 1992, Vernon Smith in 2002 and Elinor Ostrom in 2009.

Constitutional economics pays special attention to such topic as proper national wealth distribution. Many countries with changing or developing economic systems still regard their constitutions as abstract legal documents having nothing in common with actual economic policy of the state.