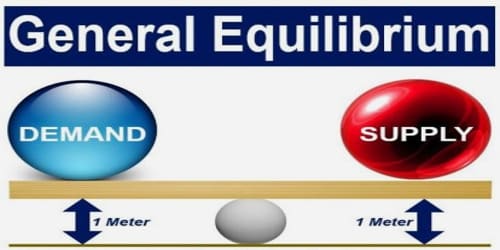 General equilibrium theory attempts to explain the behavior of supply, demand, and prices in a whole economy with several or many interacting markets, by seeking to prove that the interaction of demand and supply will result in an overall (or “general”) equilibrium. This theory is different from partial equilibrium theory by the fact that it attempts to study the several markets simultaneously rather than a single market in isolation.

General equilibrium theory both studies economies using the model of equilibrium pricing and seeks to determine in which circumstances the assumptions of general equilibrium will hold. The theory dates to the 1870s, particularly the work of French economist Léon Walras in his pioneering 1874 work Elements of Pure Economics. General equilibrium theory tried to show how and why all free markets tend toward equilibrium in the long run. The important fact was that markets didn’t necessarily reach equilibrium, only that they tended toward it. As Walras wrote in 1889, “The market is like a lake agitated by the wind, where the water is incessantly seeking its level without ever reaching it.”

Broadly speaking, general equilibrium tries to give an understanding of the whole economy using a “bottom-up” approach, starting with individual markets and agents. (Macroeconomics, as developed by the Keynesian economists, focused on a “top-down” approach, where the analysis starts with larger aggregates, the “big picture”.) Therefore, general equilibrium theory has traditionally been classified as part of microeconomics.

General equilibrium theory builds on the coordinating processes of a free market price system, first widely popularized by Adam Smith’s The Wealth of Nations (1776). This system says traders, in a bidding process with other traders, create transactions by buying and selling goods. Those transaction prices act as signals to other producers and consumers to realign their resources and activities along more profitable lines.

Walras, a talented mathematician, believed he proved that any individual market was necessarily in equilibrium if all other markets were also in equilibrium. This became known as Walras’s Law.

The modern conception of general equilibrium is provided by a model developed jointly by Kenneth Arrow, Gérard Debreu, and Lionel W. McKenzie in the 1950s. Debreu presents this model in Theory of Value (1959) as an axiomatic model, following the style of mathematics promoted by Nicolas Bourbaki. In such an approach, the interpretation of the terms in the theory (e.g., goods, prices) is not fixed by the axioms.

There are many assumptions, realistic and unrealistic, within the general equilibrium framework. Each economy is considered to have a finite number of goods in a finite number of agents. Each agent has a continuous and strictly concave utility function, along with possession of a single pre-existing good (the “production good”). In order to increase his utility, each agent must trade his production good for other goods to be consumed.