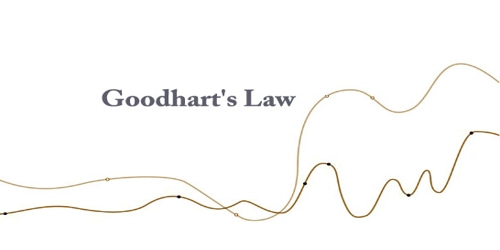 Goodhart’s Law is a theory, which was introduced by Professor Charles Goodhart stating that when a measure becomes the target, it can no longer be used as the measure. Restated and generalized in 1997 by University of Cambridge Professor Marilyn Strathern as “When a measure becomes a target, it ceases to be a good measure.” Originally, an economic theory stating that if a particular definition of the money supply were to be used as the basis for monetary policy, the stability of its statistical relationship with spending on the economy would break down and the policy would prove ineffective.

The law is now cited more widely to highlight the problems of focusing on the value of any specific variable as an indicator. In simple terms, when a measure becomes a target, it ceases to be a good measure. The applications to performance measurement in management accounting and other aspects of the business are obvious.

Goodhart’s law was originally applied to the stability of economic spending and is now used to point out the problem of assigning the value to a specific variable to be used as an indicator.

Goodhart first advanced the idea in a 1975 paper, which later became used popularly to criticize the United Kingdom government of Margaret Thatcher for trying to conduct monetary policy on the basis of targets for broad and narrow money. His original formulation was:

Any observed statistical regularity will tend to collapse once pressure is placed upon it for control purposes.

However, some parts of the concept considerably pre-dates Goodhart’s statement in 1975. Shortly after Goodhart published his paper, others suggested closely related ideas, including Campbell’s law (1976) and the Lucas critique (1976).

Jón Danı́elsson quotes the law as “Any statistical relationship will break down when used for policy purposes”, and suggests a corollary to the law for use in financial risk modeling: “A risk model breaks down when used for regulatory purposes.” Mario Biagioli has related the concept to consequences of using citation impact measures to estimate the importance of scientific publications:

All metrics of scientific evaluation are bound to be abused. Goodhart’s law (named after the British economist who may have been the first to announce it) states that when a feature of the economy is picked as an indicator of the economy, then it inexorably ceases to function as that indicator because people start to game it.