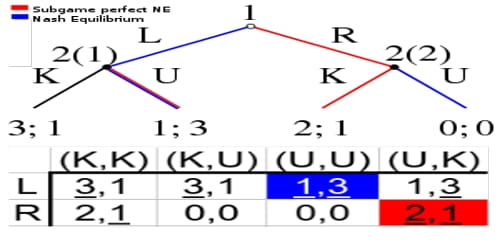 Nash Equilibrium is a concept of game theory where the optimal outcome of a game is one where no player has an incentive to deviate from his chosen strategy after considering an opponent’s choice. The concept is named after the American Mathematician and Nobel winning economist, John Nash, is a solution to a game involving two or more players who want the best outcome for themselves and must take the actions of others into account. Overall, an individual can receive no incremental benefit from changing actions, assuming other players remain constant in their strategies. A game may have multiple Nash Equilibrium or none at all. The reality of the Nash equilibrium of a game can be tested using experimental economics methods.

Game theorists use the Nash equilibrium concept to analyze the outcome of the strategic interaction of several decision makers. In other words, it provides a way of predicting what will happen if several people or several institutions are making decisions at the same time and if the outcome depends on the decisions of the others. The simple insight underlying John Nash’s idea is that one cannot predict the result of the choices of multiple decision makers if one analyzes those decisions in isolation. Instead, one must ask what each player would do, taking into account the decision-making of the others.

The modern game-theoretic concept of Nash equilibrium is instead defined in terms of mixed strategies, where players choose a probability distribution over possible actions. The concept of the mixed-strategy Nash equilibrium was introduced by John von Neumann and Oskar Morgenstern in their 1944 book The Theory of Games and Economic Behavior. Prisoner’s Dilemma – The prisoner’s dilemma is a common situation analyzed in game theory that can employ the Nash Equilibrium. In this game, two criminals are arrested and each is held in solitary confinement with no means of communicating with the other. The prosecutors do not have the evidence to convict the pair, so they offer each prisoner the opportunity to either betray the other by testifying that the other committed the crime or cooperate by remaining silent. If both prisoners betray each other, each serves five years in prison. If A betrays B but B remains silent, prisoner A is set free and prisoner B serves 10 years in prison or vice versa. If each remains silent, then each serves just one year in prison. The Nash Equilibrium in this example is for both players to betray each other. Even though mutual cooperation leads to a better outcome if one prisoner chooses mutual cooperation and the other does not, one prisoner’s outcome is worse.

Formally, the Nash equilibrium is defined in terms of an n-player game where:

Si = the set of player strategies i ∈ I