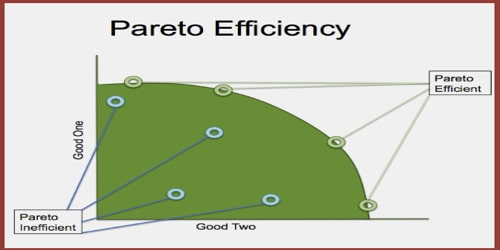 Pareto efficiency (or Pareto optimality) is a quality of allocations in economics and game theory. If an allocation is Pareto efficient, no option can be made better off without making at least one other option worse off. The concept is named after Vilfredo Pareto (1848–1923), Italian engineer and economist, who used the concept in his studies of economic efficiency and income distribution. The concept has been applied in academic fields such as economics, engineering, and the life sciences. A Pareto improvement is said to occur when at least one individual becomes better off without anyone becoming worse off. However, at Point D (16 goods and 17 services) It is possible to increase either without leading to a decline in the output of the other. Thus to be at point D would be classed as Pareto inefficient, and this is generally considered to be bad for the economy.

“Pareto efficiency” is considered as a minimal notion of efficiency that does not necessarily result in a socially desirable distribution of resources: it makes no statement about equality or the overall well-being of a society.

Aside from applications in economics, the concept of Pareto improvements can be found in many scientific fields where trade-offs are simulated and studied to determine the number and type of reallocation of resource variables necessary to achieve Pareto efficiency. In the business world, factory managers may run Pareto improvement trials, in which they reallocate labour resources to try to boost the productivity of assembly workers without say, decreasing the productivity of the packing and shipping workers.

Pareto efficiency is also concerned with allocative efficiency. To be Pareto efficient the distribution of resources needs to be at a point where it is impossible to make someone better off without making someone worse off.

It would be incorrect to treat Pareto efficiency as equivalent to societal optimization, as the latter is a normative concept that is a matter of interpretation that typically would account for the consequence of degrees of inequality of distribution. It does not require a totally equitable distribution of wealth. An economy in which a wealthy few hold the vast majority of resources can be Pareto efficient. This possibility is inherent in the definition of Pareto efficiency; often the status quo is Pareto efficient regardless of the degree to which wealth is equitably distributed.