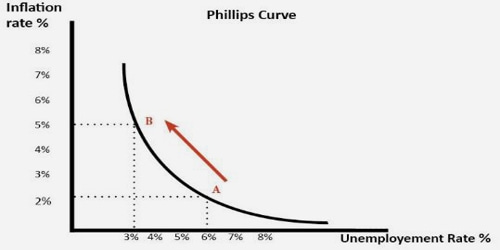 The Phillips curve is an economic concept developed by William Phillips (A.W. Phillips) stating that inflation and unemployment have a stable and inverse relationship. The theory claims that economic growth comes inflation, which in turn should lead to more jobs and less unemployment. Phillips did not himself state there was any relationship between employment and inflation, although this notion was subsequently made popular by Milton Friedman from 1967. However, the original concept has been somewhat disproven empirically due to the occurrence of stagflation in the 1970s, when there were high levels of both inflation and unemployment.

In the 1920s, an American economist Irving Fisher noted this kind of Phillips curve relationship. However, Phillips’ original curve described the behavior of money wages.

Phillips analyzed annual wage inflation and unemployment rates in the UK for the period 1860 – 1957 and then plotted them on a scatter diagram. In the years following Phillips’ 1958 paper, many economists in the advanced industrial countries believed that his results showed that there was a permanently stable relationship between inflation and unemployment. Economist James Forder argues that this view is historically false and that neither economists nor governments took that view and that the ‘Phillips curve myth’ was an invention of the 1970s.

Since 1974, seven Nobel Prizes have been given to economists for, among other things, work critical of some variations of the Phillips curve. Some of this criticism is based on the United States’ experience during the 1970s, which had periods of high unemployment and high inflation at the same time. The authors receiving those prizes include Thomas Sargent, Christopher Sims, Edmund Phelps, Edward Prescott, Robert A. Mundell, Robert E. Lucas, Milton Friedman, and F.A. Hayek.

The Phillips Curve and Stagflation

Stagflation occurs when an economy experiences stagnant economic growth, high unemployment, and high price inflation. This scenario, of course, directly contracts the theory behind the Philips curve. The United States never experienced stagflation until the 1970s, when rising unemployment did not coincide with declining inflation.

More recent research suggests that there is a moderate trade-off between low-levels of inflation and unemployment. Work by George Akerlof, William Dickens, and George Perry implies that if inflation is reduced from two to zero percent, unemployment will be permanently increased by 1.5 percent. This is because workers generally have a higher tolerance for real wage cuts than nominal ones. For example, a worker will more likely accept a wage increase of two percent when inflation is three percent than a wage cut of one percent when the inflation rate is zero.