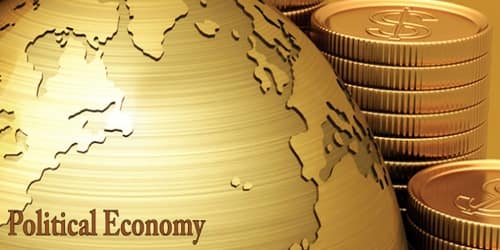 Political Economy can be generally defined as a study drawing upon branches of economics, politics, and law aiming to explain clearly the existing relations between different countries of the world. It was the original term for the study of production, the acts of buying and selling, and their relationships to laws, customs and government.

The term political economy is derived from the Greek polis, meaning “city” or “state,” and oikonomos, meaning “one who manages a household or estate.”

It is the study and use of how economic theory and methods influence and develop different social and economic systems, such as capitalism, socialism, and communism; it also analyzes how public policy is created and implemented. Political Economy endeavors to understand the policies, both domestic and international, adopted by governments all over the world.

It developed in the 17th century as the study of the economies of states which placed the theory of property in the theory of government. Some political economists proposed the labour theory of value (first introduced by John Locke, developed by Adam Smith and later Karl Marx), according to which labour is the real source of value. Many political economists also looked at the accelerating development of technology, whose role in economic and social relationships grew ever more important. In the 19th century, English political economist David Ricardo (1772–1823) further developed Smith’s ideas. His work—in particular, his concept of comparative advantage, which posited that states should produce and export only those goods that they can generate at a lower cost than other nations and import those goods that other countries can produce more efficiently—extolled the benefits of free trade and was pivotal in undermining British mercantilism. About the same time, the utilitarianism of Jeremy Bentham (1748–1832), James Mill (1773–1836), and Mill’s son John Stuart Mill (1806–73) fused together economic analysis with calls for the expansion of democracy.

In the second half of the 20th century, as the social sciences (especially economics but also political science) became increasingly abstract, formal, and specialized in both focus and methodology, political economy was revived to provide a broader framework for understanding complex national and international problems and events.

In the present, political economy means a variety of different, but related, approaches to studying economic and political behavior, which range from combining economics with other fields, to using different fundamental assumptions which challenge those of orthodox economics:

Political economy is most commonly used to refer to interdisciplinary studies that draw on economics, law and political science in order to understand how political institutions, the political environment, and capitalism influence each other.

Within political science, the term refers to modern liberal, realist, Marxian, and constructivist theories concerning the relationship between economic and political power among and within states. This is also of concern to students of economic history and institutional economics.

In today’s globalized world, Political Economy is not only linked with politics and economics but also with ecology, anthropology, history, international relations, psychology, and human geography.