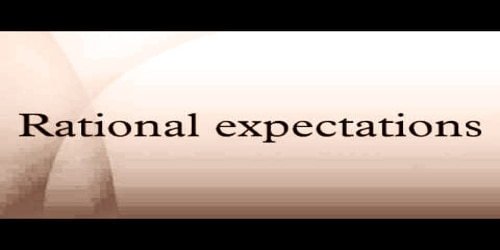 The rational expectations theory is an economic concept whereby people make choices based on their rational outlook, available information, and past experiences. The theory suggests that the current expectations in an economy are equivalent to what people think the future state of the economy will become. This contrasts with the idea that government policy influences people’s decisions. “In economics, a theory stating that economic actors make decisions based on their expectations for the future, which are based on their observations and past experiences.”

“A basic example of rational expectations theory is a situation in which a consumer delays buying a certain good because, based on his/her observations and experiences, he/she believes that the price will be less expensive in a month. If enough consumers believe that, demand eases and the good is likely to actually be less expensive next month. Thus, the consumer waits a month before buying the good.”

The theory of rational expectations was first proposed by John F. Muth of Indiana University in the early 1960s. He used the term to describe the many economic situations in which the outcome depends partly on what people expect to happen.

The rational expectations theory is often used to explain expected rates of inflation. For example, if inflation rates within an economy were higher than expected in the past, people consider this along with other indicators to assume that inflation may further increase in the future.