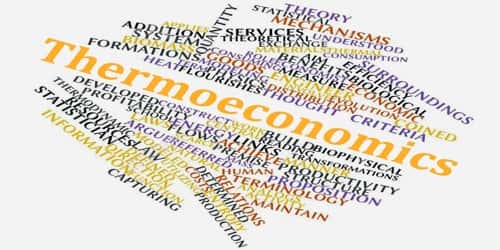 Thermoeconomics is defined as the application of thermodynamic principles to economics, as well as the application of principles of economics to the efficient design of engineering and industrial processes. It also referred to as biophysical economics, is a school of heterodox economics that applies the laws of statistical mechanics to economic theory. Thermoeconomics can be thought of as the statistical physics of economic value and is a subfield of econophysics.

Thermoeconomics analyses the power generation economics from the exergetic point of view, wherein exergy is available to work energy. Thermoeconomics is based on the assumption that energy is the only rational basis for constructing a costing function. Thermoeconomics, therefore, is a valuable tool in the assessment of industrial processes and production cycles. The terms ‘exergoeconomics’ in Europe and ‘thermoeconomics’ in the United States were used interchangeably as having the same meaning. The term thermoeconomics was used by Professor Myron Tribus in his lectures and the relationship between cost and energy was developed during a study of the desalinization process where money flow, fuel cost, and operation costs were associated with the exergy of each stream.

Thermoeconomics applies the statistical mechanics of non-equilibrium thermodynamics to model these activities. In thermodynamic terminology, the human economic activity may be described as a dissipative system, which flourishes by consuming free energy in transformations and exchange of resources, goods, and services.

Thermoeconomics has been used in industrial ecology with the aim of transforming the linear industrial processes into closed loop systems that resemble natural ecosystems. This application is aimed at developing sustainable industrial systems where waste treatment is handled efficiently and cost-effectively. Thermoeconomics has also been used in the identification of inefficiencies and potential for energy saving in single production plants.

Thermoeconomics is based on the proposition that the role of energy in biological evolution should be defined and understood not through the second law of thermodynamics but in terms of such economic criteria as productivity, efficiency, and especially the costs and benefits (or profitability) of the various mechanisms for capturing and utilizing available energy to build biomass and do work.

Thermoeconomics provides the designers with information regarding the cost formation process, as well as the interactions among thermodynamics and economics and among the various plant components, all of which are important for improvement of energy system designs. It has been used in the analysis of fuel decarbonization and carbon dioxide separation plants, and consequently in the reduction of environmental impacts resulting from increased concentrations of global greenhouse gas emissions which are widely held as being responsible for global warming.