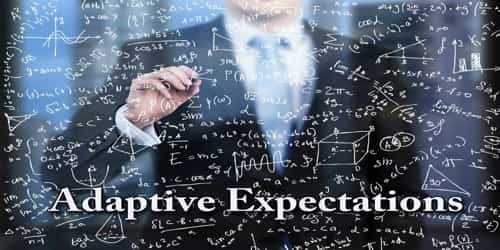 Adaptive expectations are an economic theory which gives importance to past events in predicting future outcomes. It is a hypothesized process by which people from their expectations about what will happen in the future based on what has happened in the past. For example, if inflation has been higher than expected in the past, people would revise expectations for the future.

A simple formula for adaptive expectations is Pe = Pt. -1   This states people expect inflation will be the same as last year. The term adaptive expectations refer to the way economic agents adjust their expectations about future events based on past information and on some adjustment term. Economists view decision rules that govern an agent’s behavior as being continuously under revision. As new decision rules are tried and tested, rules that yield accurate outcomes supersede those that fail to do so. In this sense, Robert Lucas (1986) refers to the trial-and-error process through which the models of behavior are determined as “adaptive.”

In particular adaptive expectations is limited if inflation is on an upward or downward trend. These limitations led to the development of rational expectations which incorporated many factors into the decision making process.

Adaptive expectations were instrumental in the Phillips curve outlined by Milton Friedman. For Friedman, workers form adaptive expectations, so the government can easily surprise them through unexpected monetary policy changes. As agents are trapped by the money illusion, they are unable to correctly perceive price and wage dynamics, so, for Friedman, unemployment can always be reduced through monetary expansions. The result is an increasing level of inflation if the government chooses to fix unemployment at a low rate for an extended period of time. However, in this framework, it is clear why and how adaptive expectations are problematic.

The adaptive expectations principle found plenty of applications in macroeconomics, such as in the analysis of hyperinflation by Philip Cagan (1956), in the consumption function by Milton Friedman (1957), and in Phillips curves for inflation and unemployment. The empirical success of the idea was ultimately challenged by the rational expectations hypothesis, developed by John Muth (1961) and extended by Thomas Sargent and Neil Wallace (1975) and Lucas (1976). More recent work, such as George Evans and Garey Ramey (2006), follows Muth (1960) and reconsiders the Lucas critique in the context of adaptive expectations.