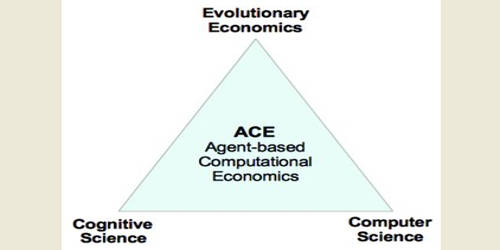 Agent-based computational economics (ACE) is the area of computational economics that studies economic processes, including whole economies, as dynamic systems of interacting agents. It is the computational study of economies
modeled as evolving systems of autonomous interacting agents. As such, it falls in the paradigm of complex adaptive systems. In corresponding agent-based models, the “agents” are “computational objects modeled as interacting according to rules” over space and time, not real people. The rules are formulated to model behavior and social interactions based on incentives and information. ACE is, therefore, a bottom-up culture-dish approach to the study of economic systems.

The theoretical assumption of mathematical optimization by agents in equilibrium is replaced by the less restrictive postulate of agents with bounded rationality adapting to market forces. One such approach is Agent-based Computational Economics (ACE), the computational study of economic processes modeled as dynamic systems of interacting agents. ACE models apply numerical methods of analysis to computer-based simulations of complex dynamic problems for which more conventional methods, such as theorem formulation, may not find ready use. Starting from initial conditions specified by the modeler, the computational economy evolves over time as its constituent agents repeatedly interact with each other, including learning from interactions. In these respects, ACE has been characterized as a bottom-up culture-dish approach to the study of economic systems.

ACE has a similarity to, and overlap with, game theory as an agent-based method for modeling social interactions. Thus, ACE is a specialization of the economics of the basic complex adaptive systems paradigm. But practitioners have also noted differences from standard methods, for example in ACE events modeled being driven solely by initial conditions, whether or not equilibria exist or are computationally tractable, and in the modeling facilitation of agent autonomy and learning.

The application of agent-based modeling to economics is called Agent-Based Computational Economics (ACE). The method has benefited from continuing improvements in modeling techniques of computer science and increased computer capabilities. The ultimate scientific objective of the method is to “test theoretical findings against real-world data in ways that permit empirically supported theories to cumulate over time, with each researcher’s work building appropriately on the work that has gone before.” The subject has been applied to research areas like asset pricing, competition, and collaboration, transaction costs, market structure, and industrial organization and dynamics, welfare economics, and mechanism design, information and uncertainty, macroeconomics, and Marxist economics.