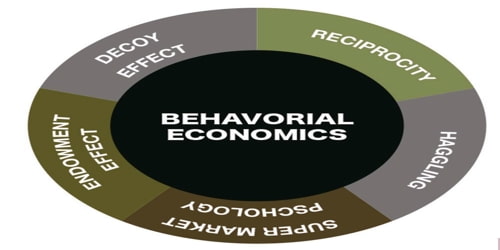 Behavioral economics is a smaller part of economics that combines what we know about psychology with what we know about economics. Normally, economics does not consider the way humans actually think, but instead, simplifies decision-making to make economic models easier to understand. It attempts to understand the effect of individual psychological processes, including emotions, norms, and habits on individual decision-making in a variety of economic contexts.

Now that behavioral economics is growing in popularity, and more social scientists are researching the topic, ways to apply ideas are becoming more common. If framing a choice a certain way will “nudge,” or push, someone to make a better decision, those who are in charge of creating options can use this to produce a better outcome.

A practical application of behavioural economics is the use of real-time feedback to overcome salience bias.

To illustrate an example, when we are taking a shower, what is most salient to us is the pleasant sensation of warm water. Other factors such as the cost of water, our goal to conserve water etc are less salient to us in that moment. Consequently, we find ourselves spending more time to shower (and conserving less water) than we would otherwise like to. To overcome salience bias in water usage, smart shower devices are introduced to provide users real-time feedback during their showers. The smart device displays information of water consumption so that users could track their water consumption for each shower. This behavioural solution has led to a significant reduction in water consumption among households and the most plausible explanation is due to the lessening of salience bias.

For centuries, how individuals valued economic interests had been considered settled by Classic Utility Theory.  This doctrine traces back quite specifically to a single landmark paper written by Daniel Bernoulli in 1738. Bernoulli’s analysis postulates that economic agents determine the value of money (its “utility”) and hence make decisions by reference to their final wealth state following the transaction or proposed transaction.

In the future, the hope is that through small changes, the public will receive large-scale benefits. In Denmark, the Danish government is employing the concept of anchoring to increase the number of drivers who are organ donors. In the United States, the White House has hired Cass Sunstein, a behavioral economist, to help guide policymakers. Richard Thaler also works in the US Cabinet on the new Behavioral Insight Team. The U.S., as well as Britain, has considered the idea of default options helping increase retirement savings.