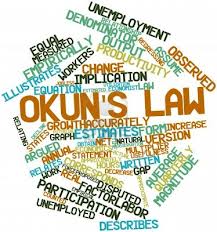 Graph of US quarterly data (not annualized) from 1947 through 2002 estimates a form of the difference version of Okun’s law: %Change GNP = .856 – 1.827*(Change Unemployment Rate). R^2 of .504. Differences from other results are partly due to the use of quarterly data. In economics, Okun’s law is an empirically observed relationship relating unemployment to losses in a country’s production first quantified by Arthur M. Okun. The “gap version” states that for every 1% increase in the unemployment rate, a country’s GDP will be at an additional roughly 2% lower than its potential GDP. The “difference version” [1] describes the relationship between quarterly changes in unemployment and quarterly changes in real GDP. The accuracy of the law has been disputed. The name refers to economist Arthur Okun who proposed the relationship in 1962.

One implication of Okun’s law is that an increase in labor productivity or an increase in the size of the labor force can mean that real net output grows without net unemployment rates falling (the phenomenon of “jobless growth”). As a relationship between changes in the unemployment rate and economic growth, Okun’s law predicts that growth slowdowns typically coincide with rising unemployment. The recent experience of 2006 shows, however, that this is not always the case. This article has documented several reasons for this. First among these is that Okun’s law is not a tight relationship. There have been many exceptions to Okun’s law or instances where growth slowdowns have not coincided with rising unemployment. This is true when looking over both long and short time periods. This is a reminder that Okun’s law—contrary to connotations of the word “law”—is only a rule of thumb, not a structural feature of the economy. This article has also documented that Okun’s law has not been a stable relationship over time. Part of this variation is related to the state of the business cycle: The relationship between output and unemployment is different in recessions and expansions, and recent expansions have been longer than average. Additionally, the data suggest that a weakening of the contemporaneous relationship between output and unemployment has coincided with a stronger relationship between past output growth and current unemployment.