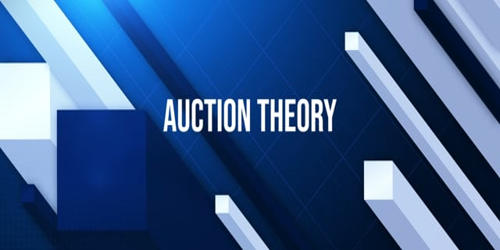 Auctions are an event where different parties can bid for the right to purchase a good or service. Auction theory is an applied branch of economics that deals with how people act in auction markets and researches the properties of auction markets. It is the standard reference on auctions and the first source of authoritative information about multi-unit auctions. They are used for a variety of goods, but, in particular for rare expensive goods, which are hard to price. They are the most widely-studied economic mechanism.

Auctions are seen as a potentially efficient mechanism for the sale and purchase of goods. There are many possible designs for an auction and typical issues studied by auction theorists include the efficiency of given auction design, optimal and equilibrium bidding strategies, and revenue comparison. Fundamentally, an auction is an economic mechanism whose purpose is the allocation of goods and the formation of prices for those goods via a process known as bidding. Auction theory is also used as a tool to inform the design of real-world auctions; most notably auctions for the privatization of public-sector companies or the sale of licenses for use of the electromagnetic spectrum. Depending on the properties of the bidders and the nature of the items to be auctioned, various auction structures may be either more efficient or more profitable to the seller than others.

Auctions are characterized as transactions with a specific set of rules detailing resource allocation according to participants’ bids. They have also been made much easier with the advent of the internet which makes possible online bidding. They are categorized as games with incomplete information because, in the vast majority of auctions, one party will possess information related to the transaction that the other party does not (e.g., the bidders usually know their personal valuation of the item, which is unknown to the other bidders and the seller). Auctions take many forms, but they share the characteristic that they are universal and can be used to sell or buy any item. In many cases, the outcome of the auction does not depend on the identity of the bidders (i.e., auctions are anonymous). Auctions can be in the form of live or online bidding.

The most common auction types are: