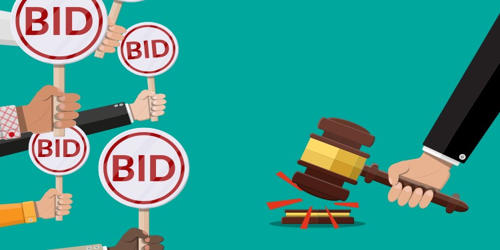 An auction is a public sale in which goods or property are sold to the highest bidder. It is usually a process of buying and selling goods or services by offering them up for bid, taking bids, and then selling the item to the highest bidder or buying the item from the lowest bidder. The bidders compete against each other, with each subsequent bid being higher than the previous bid. Some exceptions to this definition exist and are described in the section about different types. They are popular because buyers and sellers believe they will get a good deal of buying or selling assets. Auctions are conducted both live and online. An example of an auction is the sale of a foreclosed house to the highest bidder.

The definition of an auction is a sale of one or several items in which buyers bid how much they are willing to pay. The branch of economic theory dealing with auction types and participants’ behavior in auctions is called auction theory. It is also called public sale. a publicly held sale at which property or goods are sold to the highest bidder. An auction is considered complete when the vendor accepts the highest bid offered and the buyer pays for the goods or services and takes possession of them.

The open ascending price auction is arguably the most common form of auction in use throughout history. Participants bid openly against one another, with each subsequent bid required to be higher than the previous bid. Once an item is placed for sale, the auctioneer will start at a relatively low price to attract a large number of bidders.  The asset or service in question is sold to the party that places the highest bid in an open auction and usually to the highest bidder in a closed auction. An auctioneer may announce prices, bidders may call out their bids themselves or have a proxy call out a bid on their behalf, or bids may be submitted electronically with the highest current bid publicly displayed. Examples of auctions include livestock markets where farmers buy and sell animals, car auctions, or an auction room at Sotheby’s or Christie’s where collectors bid on works of art.

In finance, Auction is a sale of government securities in which competitive bidding determines their yield. They were and are applied for trade-in diverse contexts. These contexts are antiques, paintings, rare collectibles, expensive wines, commodities, livestock, radio spectrum, used cars, even emission trading, and many more. Investment bankers use auctions to attract the highest possible price when selling a company.