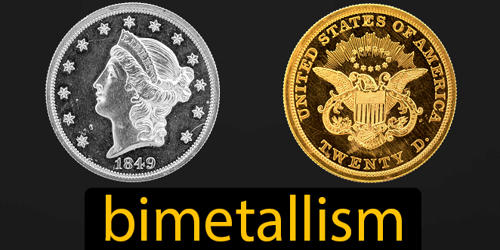 Bimetallism is a monetary system where the value of the money is based on two different metals. It is a system of allowing the unrestricted currency of two metals (e.g. gold and silver) as legal tender at a fixed ratio to each other. It is a monetary standard or system based upon the use of two metals, traditionally gold and silver, rather than one (monometallism). It is a monetary standard in which the value of the monetary unit is defined as equivalent to certain quantities of two metals, typically gold and silver, creating a fixed rate of exchange between them. The system also provided a free and unlimited market for the two metals, imposed no restrictions on the use and coinage of either metal and made all other money in circulation redeemable in either gold or silver.

For scholarly purposes, “proper” bimetallism is sometimes distinguished as permitting that both gold and silver money is legal tender in unlimited amounts and that gold and silver may be taken to be coined by the government mints in unlimited quantities. A major problem in the international use of bimetallism was that, with each nation independently setting its own rate of exchange between the two metals, the resulting rates often differed widely from country to country. This distinguishes it from “limping standard” bimetallism, where both gold and silver are legal tender but only one is freely coined (e.g. the money of France, Germany, and the United States after 1873), and from “trade” bimetallism, where both metals are freely coined but only one is legal tender and the other is used as “trade money” (e.g. most money in western Europe from the 13th to 18th centuries). In an attempt to establish the bimetallic system on an international scale, France, Belgium, Italy, and Switzerland formed the Latin Monetary Union in 1865. 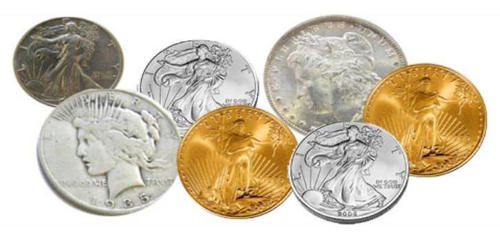 Bimetallism became an alternative to the gold standard where the value of money was based on how much gold a country had in its reserves and how much that gold was worth. Economists also distinguish legal bimetallism, where the law guarantees these conditions, and de facto bimetallism, where gold and silver coins circulate at a fixed rate. Supporters of bimetallism offer three arguments for it: (1) the combination of two metals can provide greater monetary reserves; (2) greater price stability will result from the larger monetary base; and (3) greater ease in the determination and stabilization of exchange rates among countries using gold, silver, or bimetallic standards will result. A bimetallic standard is a monetary system in which a government recognizes coins composed of gold or silver as legal tender.