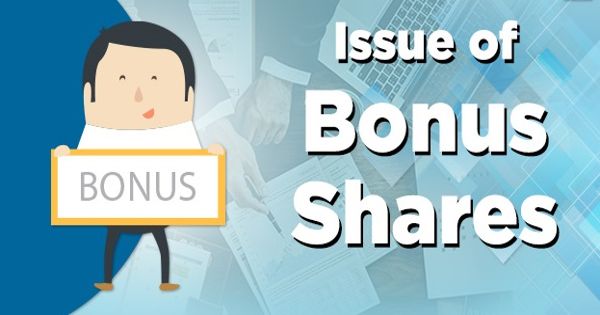 Bonus shares are additional shares given to the current shareholders without any additional cost, based upon the number of shares that a shareholder owns. These types of equity shares are issued out of retained earnings of a business, wherein the profits are distributed among investors in the form of an additional stake in a company. These are company’s accumulated earnings which are not given out in the form of dividends, but are converted into free shares.

Bonus shares are extra shares given by a company to its shareholders free of charge. They are often given out instead of dividends.

These shares are the additional shares that a company gives to its existing shareholders on the basis of shares owned by them. Contrary to other types of equity instruments, bonus shares do not increase the total market capitalization value of a company. Bonus shares are issued to the shareholders without any additional cost.

Bonus shares are issued by a company when it is not able to pay a dividend to its shareholders due to a shortage of funds in spite of earning good profits for that quarter. The basic principle behind bonus shares is that the total number of shares increases with a constant ratio of the number of shares held to the number of shares outstanding. In such a situation, the company issues bonus shares to its existing shareholders instead of paying dividends. These shares are given to the current shareholders on the basis of their existing holding in the company. For instance, if Investor ‘A’ holds 200 shares of a company and a company declares a 4:1 bonus, that is for every one share, he gets 4 shares for free. That is a total of 800 shares for free and his total holding will increase to 1000 shares.

Companies issue bonus shares to encourage retail participation and increase their equity base. It just represents capitalization of excess funds generated from production. When price per share of a company is high, it becomes difficult for new investors to buy shares of that particular company.