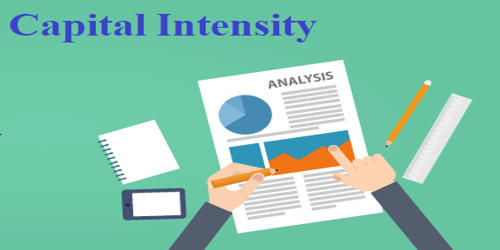 Capital intensity is the infusion of high amounts of capital in a business or production process and therefore requires a higher proportion of fixed assets to produce goods and services. It is the amount of fixed or real capital present in relation to other factors of production, especially labor. At the level of either a production process or the aggregate economy, it may be estimated by the capital to labor ratio, such as from the points along a capital/labor isoquant. Increased capital intensity can cause some workers to lose their jobs because they are no longer needed. Some examples of capital-intensive businesses are oil factories, chemical and petroleum plants, power generation plants, aircraft manufacturing, etc.

Capital intensive refers to a production process that requires a high percentage of investment in fixed assets (machines, capital, plant) to produce. Capital-intensive industries use a large portion of capital to buy expensive machines, compared to their labor costs. A capital-intensive production process will have a relatively low ratio of labor inputs and will have higher labor productivity (output per worker). The term came about in the mid- to late-nineteenth century as factories such as steel or iron sprung up around the newly industrialized world. With the added expense of machinery, there was a greater financial risk. This makes new capital-intensive factories with high tech machinery a small share of the marketplace, even though they raise productivity and output. A capital intensive production process will tend to have a high ratio of fixed costs to variable costs. Examples of capital-intensive industries include automobile manufacturing, oil production, and refining, steel production, telecommunications, and transportation sectors.

The degree of capital intensity is easy to measure in nominal terms. It is simply the ratio of the total money value of capital equipment to the total potential output. However, this measure need not be related to real economic activity because it can rise due to inflation. Then the question arises, how do we measure the “real” amount of capital goods?