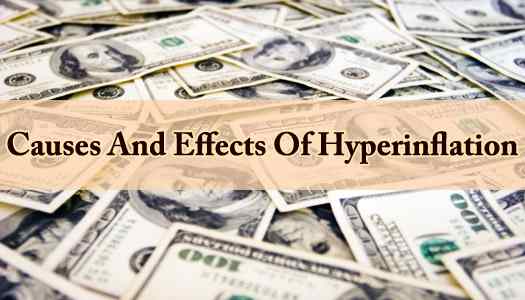 Causes And Effects Of Hyperinflation

Hyperinflation is the phase where money has long ceased to be a store of value and is a primary contributor to economic instability. It is a term to describe rapid, excessive, and out-of-control general price increases in an economy.

In economics, hyperinflation is very high and typically accelerating inflation. It quickly erodes the real value of the local currency, as the prices of all goods increase. This causes people to minimize their holdings in that currency as they usually switch to more stable foreign currencies, often the US dollar. Prices typically remain stable in terms of other relatively stable currencies.

Generally, inflation is termed hyperinflation when the rate of inflation grows at more than 50% a month. American economics professor Phillip Cagan first studied the economic concept in his book, “The Monetary Dynamics of Hyperinflation.”

For comparative purposes, the U.S. inflation rate as measured by the Consumer Price Index (CPI) is typically less than 2% per year, according to the Bureau of Labor Statistics. The CPI is merely an index of the prices for a selected basket of goods and services. Hyperinflation causes consumers and businesses to need more money to buy products due to higher prices. Whereas normal inflation is measured in terms of monthly price increases, hyperinflation is measured in terms of exponential daily increases that can approach 5 to 10% a day. Hyperinflation occurs when the inflation rate exceeds 50% for a period of a month.

Hyperinflation is crueler where inflation is fast and can be painful for citizens. It was one of the reasons for WWII, when Germany went into hyperinflation and government failed and German administration was handed over to Hitler who was the Army General of Germany. He decided to loot the neighboring nations to get Germany out of its predicament. He expected countries like Poland and Hungary to have a lot of gold reserves which can be temporarily used to build the German economy back to life. Inflation in Germany was so hyper that those days 1 dollar would fetch 1 mn German marks.

Hyperinflation commonly occurs when there is a significant rise in the money supply that is not supported by economic growth. Simply put, it is caused by dramatically increasing the amount of money in an economy. The increase in money supply is often caused by government printing and infusing more money into the domestic economy. As there is more money in circulation, prices rise.

Excessive Money Supply – Hyperinflation has occurred in times of severe economic turmoil and depression. Depression is a prolonged period of a contracting economy, meaning the growth rate is negative. A recession is typically a period of negative growth that occurs for more than two quarters or six months. A depression, on the other hand, can last years but also exhibits extremely high unemployment, company and personal bankruptcies, lower productive output, and less lending or available credit. The response to depression is usually an increase in the money supply by the central bank. The extra money is designed to encourage banks to lend to consumers and businesses to create spending and investment.

However, if the increase in the money supply is not supported by economic growth as measured by gross domestic product (GDP), the result can lead to hyperinflation. If GDP, which is a measure of the production of goods and services in an economy, isn’t growing, businesses raise prices to boost profits and stay afloat. Since consumers have more money, they pay higher prices, which leads to inflation. As the economy deteriorates further, companies charge more, consumers pay more, and the central bank prints more money leading to a vicious cycle and hyperinflation.

Supply shocks – A number of hyperinflations were caused by some sort of extreme negative supply shock, often but not always associated with wars, the breakdown of the communist system or natural disasters.

Nobel Prize winner Milton Friedman said “We economists don’t know much, but we do know how to create a shortage. If you want to create a shortage of tomatoes, for example, just pass a law that retailers can’t sell tomatoes for more than two cents per pound. Instantly you’ll have a tomato shortage. It’s the same with oil or gas.”

Hyperinflation quickly devalues the local currency in foreign exchange markets as the prices of goods and services rise in conjunction with the increase in the money supply. Such a situation, in effect, often causes the holder of the local currency to minimize their holdings and switch to more stable foreign currencies.

One of the most important characteristics of hyperinflation is the accelerating substitution of the inflating money by stable money gold and silver in former times, then relatively stable foreign currencies after the breakdown of the gold or silver standards (Thiers’ Law). If inflation is high enough, government regulations like heavy penalties and fines, often combined with exchange controls, cannot prevent this currency substitution. As a consequence, the inflating currency is usually heavily undervalued compared to stable foreign money in terms of purchasing power parity. So foreigners can live cheaply and buy at low prices in the countries hit by high inflation. It follows that governments that do not succeed in engineering a successful currency reform in time must finally legalize the stable foreign currencies (or, formerly, gold and silver) that threaten to fully substitute the inflating money. Otherwise, their tax revenues, including the inflation tax, will approach zero. The last episode of hyperinflation in which this process could be observed was in Zimbabwe in the first decade of the 21st century. In this case, the local money was mainly driven out by the US dollar and the South African rand.

Severe hyperinflation can cause the domestic economy to switch to a barter economy, with significant repercussions to business confidence. It can also destroy the financial system as banks become unwilling to lend money.