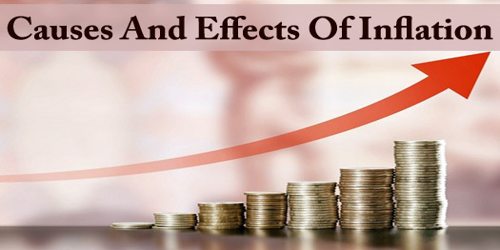 Causes And Effects Of Inflation

Inflation is defined as a sustained increase in the general level of prices for goods and services. It is measured as an annual percentage increase. As inflation rises, every dollar we own buys a smaller percentage of a good or service.

Economists generally believe that very high rates of inflation and hyperinflation are caused by excessive growth of the money supply. Views on which factors determine low to moderate rates of inflation are more varied. Low or moderate inflation may be attributed to fluctuations in real demand for goods and services or changes in available supplies such as during scarcities. However, the consensus view is that a long sustained period of inflation is caused by money supply growing faster than the rate of economic growth. Inflation affects economies in various positive and negative ways.

The main causes of inflation are either excess aggregate demand (AD) (economic growth too fast) or cost-push factors (supply-side factors). There are two main causes of inflation: Demand-pull and Cost-push. Both are responsible for a general rise in prices in an economy. But they work differently. Demand-pull conditions occur when demand from consumers pulls prices up. Cost-push occurs when supply cost force prices higher.

Demand-pull inflation is the most common cause of rising prices. It occurs when consumer demand for goods and services increases so much that it outstrips supply. Producers can’t make enough to meet demand. They may not have time to build the manufacturing needed to boost supply. They may not have enough skilled workers to make it. Or the raw materials might be scarce.

If sellers don’t raise the price, they will sell out. They soon realize they now have the luxury of hiking up prices. If enough do this, they create inflation.

There are several circumstances that create demand-pull inflation. For example, a growing economy affects inflation because when people get better jobs and become more confident, they spend more. As prices rise, people start to expect inflation. That expectation motivates consumers to spend more now to avoid future price increases. That further boosts growth. For this reason, a little inflation is good. Most central banks recognize this. They set an inflation target to manage the public’s expectation of inflation.

Marketing and new technology create demand-pull inflation for specific products or asset classes. The asset inflation that results can drive widespread price increases. Asset and wage inflation are types of inflation. For example, Apple uses branding to create demand for its products. That allows it to command higher prices than the competition. New technology also occurred in the form of financial derivatives.

If there is an increase in the costs of firms, then businesses will pass this on to consumers. There will be a shift to the left in the AS. 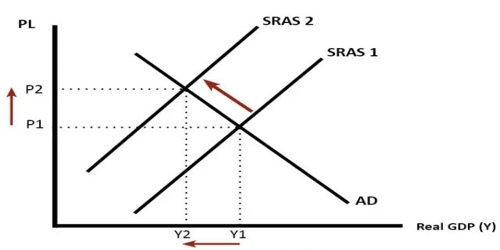 Cost-push inflation can be caused by many factors.

Almost everyone thinks inflation is evil, but it isn’t necessarily in. Inflation affects different people in different ways. It also depends on whether inflation is anticipated or unanticipated If the inflation rate corresponds to what the majority of people are tweeting (anticipated inflation), then we can compensate and the cost isn’t high. For example, banks can vary their interest rates and workers can negotiate contracts that include automatic wage hikes as the price level goes up.

If economic growth matches the growth of the money supply, inflation should not occur when all else is equal. A large variety of factors can affect the rate of both. For example, investment in market production, infrastructure, education, and preventive health care can all grow an economy in greater amounts than investment spending.

Inflation is a decrease in the purchasing power of currency due to a rise in prices across the economy. Within living memory, the average price of a cup of coffee was a dime. Today the price is closer to two dollars.

Such a price change could conceivably have resulted from a surge in the popularity of coffee, or price pooling by a cartel of coffee producers, or years of devastating drought/flooding/conflict in a key coffee-growing region. In those scenarios, the price of coffee products would rise, but the rest of the economy would carry on largely unaffected. That example would not qualify as inflation since only the most caffeine-addled consumers would experience significant depreciation in their overall purchasing power.

The favorable impacts of inflation are as follows:

If inflation becomes too high, it can cause people to severely curtail their use of the currency, leading to an acceleration in the inflation rate. High and accelerating inflation grossly interferes with the normal workings of the economy, hurting its ability to supply goods. Hyperinflation can lead to the abandonment of the use of the country’s currency (for example as in North Korea) leading to the adoption of an external currency (dollarization). High inflation increases the opportunity cost of holding cash balances and can induce people to hold a greater portion of their assets in interest-paying accounts. However, since cash is still needed to carry out transactions this means that more “trips to the bank” are necessary to make withdrawals, proverbially wearing out the “shoe leather” with each trip. With high inflation, firms must change their prices often to keep up with economy-wide changes. But often changing prices is itself a costly activity whether explicitly, as with the need to print new menus, or implicitly, as with the extra time and effort needed to change prices constantly.

People like to complain about prices going up, but they often ignore the fact that wages should be rising as well. The question shouldn’t be whether inflation is rising, but whether it’s rising at a quicker pace than our wages.

Finally, inflation is a sign that an economy is growing. In some situations, little inflation (or even deflation) can be just as bad as high inflation. The lack of inflation may be an indication that the economy is weakening. As we can see, it’s not so easy to label inflation as either good a bad it depends on the overall economy as well as our personal situation.