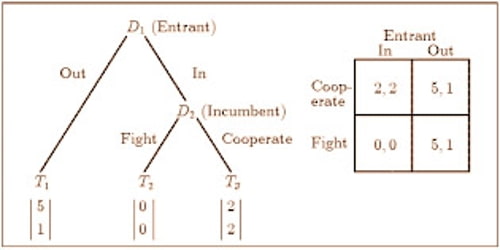 The chainstore paradox (or “chain-store paradox”) is a concept that purports to refute standard game theory reasoning.

The chain store game is a simple game in an extensive form which produces an inconsistency between game theoretical reasoning and plausible human behavior. Well-informed players must be expected to disobey game theoretical recommendations.

A story about a fictitious chain store and its potential competitors is a convenient way to describe the game. This expositionary device should not be misunderstood as a model of a real situation. In view of the story, the game will be called “the chain store game”. The disturbing disagreement between plausible game behavior and game theoretical reasoning constitutes the “chain store paradox”. The chain store paradox throws new light on the well-known difficulties which arise in connection with the finite super game of prisoners’ dilemma game. A limited rationality approach seems to be needed in order to explain human strategic behavior. For this purpose, a three-level theory of decision making is developed, where decisions can be made on different levels of rationality. This theory explains why insight into the rational solution of a decision problem does not necessarily mean that the corresponding course of action will be taken.

Selten’s Response – Reinhard Selten’s response to this apparent paradox is to argue that the idea of “deterrence”, while irrational by the standards of Game Theory, is, in fact, an acceptable idea by the rationality that individuals actually employ. Selten argues that individuals can make decisions on three levels: Routine, Imagination, and Reasoning.

Player 0: chain store (incumbent) who has stores in 20 different cities.

Player i: potential entrant in city i,

In period i, player i decides whether or not to enter the market in his city.  After player i announces his decision, player 0 decides to the player either soft or tough.

–Similar payoffs and decisions for every ith players.