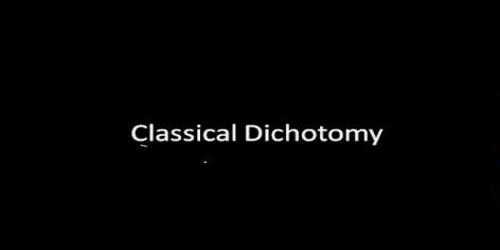 According to the classical dichotomy, changes in monetary variables do not affect real values as output, employment, and the real interest rate. Money is therefore neutral in the sense that it cannot affect these real variables. The classical dichotomy is, essentially, a derivation of the quantity theory of money, which is captured by the formula MV = PY, where M stands for the money stock, V is the velocity of money circulation, P is the price level, and Y is the level of income. The monetary value of output (PY) is thus equal to overall aggregate monetary expenditure. Actually, according to classical theory, the nominal variables move in proportion to changes in the quantity of money, while real variables such as GNP, employment, real wage rate, the real rate of interest remain unaffected.

The classical dichotomy was integral to the thinking of some pre-Keynesian economists (“money as a veil”) as a long-run proposition and is found today in new classical theories of macroeconomics. In new classical macroeconomics, there is a short-run Phillips curve which can shift vertically according to the rational expectations being reviewed continuously. A classical economic concept that states general price levels may be influenced by monetary forces yet there is no real effect on activity.
In the strict sense, money is not neutral in the short-run, that is, classical dichotomy does not hold, since agents tend to respond to changes in prices and in the quantity of money through changing their supply decisions. In conclusion, the classical dichotomy implies that real variables and monetary variables are independent of each other.