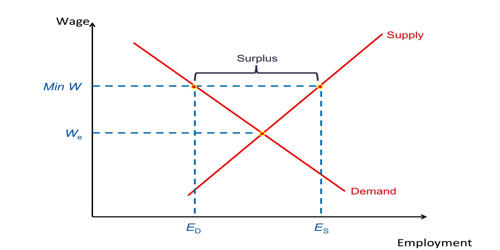 Unemployment occurs when there are people who are willing and able to work but don’t have a job. Classical unemployment occurs when real wages are kept above the market-clearing wage rate, leading to a surplus of labor supplied. On the other hand, most economists argue that as wages fall below a livable wage, many choose to drop out of the labor market and no longer seek employment. It is sometimes known as real wage unemployment because it refers to real wages being too high. That is especially true in countries in which low-income families are supported through public welfare systems. It is unemployment resulting from an increase in wages above the free market equilibrium wage rate. In such cases, wages would have to be high enough to motivate people to choose employment over what they receive through public welfare.

Classical unemployment is caused when wages are ‘too’ high. Wages below a livable wage are likely to result in lower labor market participation in the above-stated scenario. This explanation of unemployment dominated economic theory before the 1930s when workers themselves were blamed for not accepting lower wages, or for asking for too high a wage. In addition, consumption of goods and services is the primary driver of increased demand for labor. Higher wages lead to workers having more income available to consume goods and services. Therefore, higher wages increase general consumption and as a result demand for labor increases and unemployment decreases. Too high real wages mean firms cannot afford to employ all available workers so some are left unemployed. 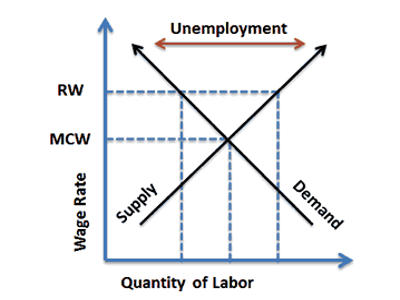 So when real wages are too high in an economy, firms cannot profitably employ all the labor on offer. As a result, some of the economy’s pool of labor is not used. This is known as classical unemployment. It occurs when the wages a worker is willing to accept (real wages) are in excess of those an employer is willing to pay (market-clearing wage). This type of unemployment can be reduced by a policy aimed at reducing the real wage rate, e.g. tax policies, or by improving productivity, e.g. through education and training.

Many economists have argued that unemployment increases with increased governmental regulation. For example, minimum wage laws raise the cost of some low-skill laborers above market equilibrium, resulting in increased unemployment as people who wish to work at the going rate cannot. Classical economists stress the importance of this type of unemployment. They argue that if wages were more flexible, then most unemployment could be solved. However, that argument overly simplifies the relationship between wage rates and unemployment by ignoring numerous factors that contribute to unemployment. Some, such as Murray Rothbard, suggest that even social taboos can prevent wages from falling to the market-clearing level.