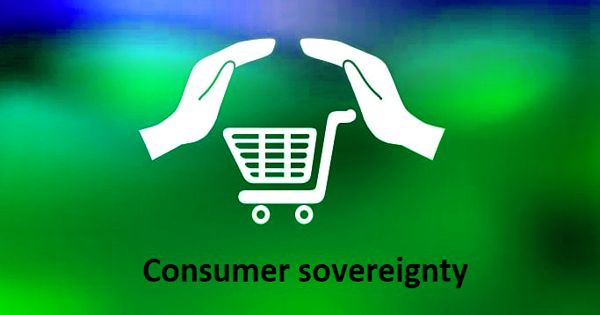 Consumer sovereignty is the theory that consumer preferences determine the production of goods and services. It is the idea that it is consumers who influence production decisions. It is an economic concept where the consumer has some controlling power over goods that are produced and the idea that the consumer is the best judge of their own welfare. This means consumers can use their spending power as ‘votes’ for goods.

Consumer sovereignty is consumers making choices one by one, consumers buying one thing and not another, consumers transferring their money to some producers and not to others.

The theory of consumer sovereignty implies that the consumer knows what is best for himself or herself and his or her preferences will decide the allocation of scarce resources in the economy. Consumer sovereignty in production is the controlling power of consumers, versus the holders of scarce resources, in what final products should be produced from these resources. It is consumers making choices one by one, consumers buying one thing and not another, consumers transferring their money to some producers and not to others. It is sometimes used as a hypothesis that the production of goods and services is determined by the consumers’ demand (rather than, say, by capital owners or producers).

Consumer sovereignty has been used in both a descriptive and a normative form. It is the economic power exercised by the preferences of consumers in a free market. In the first form, the term simply means that all economic processes are ultimately focused on satisfying the wants of the final consumer. Production, exchange, and distribution are all means; consumption is the end. As a normative principle, consumer sovereignty asserts that the performance of any economy ought to be evaluated in terms of how well it fulfills the wants of its consumers.

Consumer sovereignty in welfare is the idea that the consumer is the best judge of their own welfare (rather than, say, politicians). Contemporary economic policy discourses are heavily oriented towards competition and efficiency using the modern conceptualization of the market as an institution for resource allocation and governance. It is used to claim that, for example, the government should help the poor by giving them monetary transfers, rather than by giving them products that are deemed “essential” by the politicians. It is desirable that consumers run the economy because it is the only way to have a prosperous society.