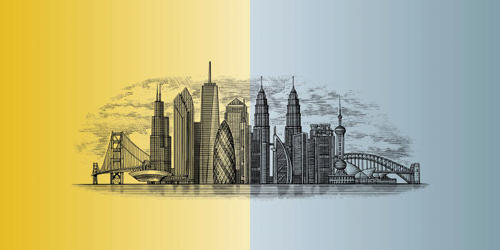 Corporate capitalism is characterized by industrialization and the dominance of big businesses, and policies that have allowed investors to invest with limited liability. A large proportion of the economy of the United States and its labor market falls within corporate control. Large corporations and businesses have greater influence and powers over the government policies in these environments, including the regulatory agencies and their policies. In the developed world, corporations dominate the marketplace, comprising 50% or more of all businesses. Corporate capitalism is a capitalist market economy dominated by hierarchical and bureaucratic corporations that control the factors of production and the amount of profits they generate. Those businesses which are not corporations contain the same bureaucratic structure of corporations, but there is usually a sole owner or group of owners who are liable to bankruptcy and criminal charges relating to their business. Corporations have limited liability and remain less regulated and accountable than sole proprietorships.

Corporations are the backbone of capitalism. Legal distinctions between things are important. Corporations are usually called public entities or publicly traded entities when parts of their business can be bought in the form of shares on the stock market. The ability to sign different sorts of contracts for different areas of life opens up a wide range of extra choices. This is done as a way of raising capital to finance the investments of the corporation. Corporate Capitalism, simply enough, is any capitalist society in which the marketplace is dominated by large corporations. Which is to say, basically the entire ‘civilized’ world nowadays. However, the shareholders will appoint executives who will run the corporation on their behalf. The shareholders appoint the executives of the corporation, who are the ones running the corporation via a hierarchical chain of power, where the bulk of investor decisions are made at the top and have effects on those beneath them.