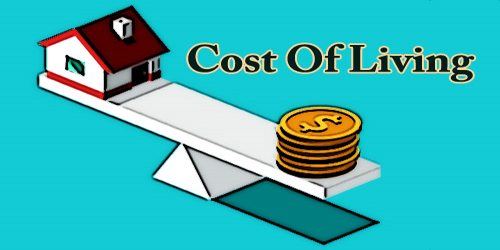 Cost of Living refers to the amount of money required to maintain a minimum standard of living, by being able to afford the basic necessities of life such as food, clothing, shelter, transportation, telephone and internet, recreation, education, healthcare, taxes, and other utilities. It determines what amount we pay, for availing the necessary items and amenities.

Changes in the cost of living over time are often operationalized in a cost-of-living index. Cost of living calculations are also used to compare the cost of maintaining a certain standard of living in different geographic areas. Differences in cost of living between locations can also be measured in terms of purchasing power parity rates. With the help of cost of living, one can easily make a comparison between one place to another, as it differs from area to area and also changes over time, i.e. the advancement of technology, modernization, and industrialization lead to an increase in the cost of living.

The cost of living is indicated through the measure of a Cost of Living Index and the Parity of the Purchasing Power.

The cost of living can be a significant factor in personal wealth accumulation because a salary can provide a higher standard of living in a city where daily expenses such as rent, food, and entertainment are less. In contrast, a high salary can seem insufficient in an expensive city such as New York. In a 2018 survey, Mercer, a global human resources firm, finds the cities with the highest cost of living include Hong Kong; Luanda, the capital of Angola; Tokyo; Zurich, and Singapore, in that order. New York City was ranked the costliest city in the United States followed by San Francisco and Los Angeles, Chicago, Washington, and Boston.

Annual escalation clauses in employment contracts can specify retroactive or future percentage increases in worker pay which are not tied to any index. These negotiated increases in pay are colloquially referred to as cost-of-living adjustments or cost-of-living increases because of their similarity to increases tied to externally determined indexes. The cost-of-living allowance is equal to the nominal interest minus the real interest rate.

The rising cost of living has spurred debate over the U.S. federal minimum wage and the disparity between the lowest salary allowed by law and the earnings needed to maintain an adequate cost of living. Proponents of a hike in wages cite increased worker productivity levels since 1968 as inequitably correlated to the minimum hourly rate of pay. As pay levels once tracked the increase in productivity, the divergence between earnings and worker efficiency has reached historically disproportionate levels. By contrast, opponents of a minimum wage contend that a raise could spur higher consumer prices as employers offset rising labor costs.

The Economic Policy Institute updated its Family Budget Calculator in March 2018. The calculator helps families determine how much salary they will need to cover the cost of living in 3,142 counties in all 611 metro areas.

The calculator finds San Francisco to be the most expensive city and a two-parent household with two children would need a total income of $148,439 with a basic budget for expenses. The least expensive metro area was Brownsville, Texas where the same family would need a median income of $32,203. Interestingly, there is nowhere in the United States where a single adult with no children would be able to cover the cost of living earning the minimum wage.