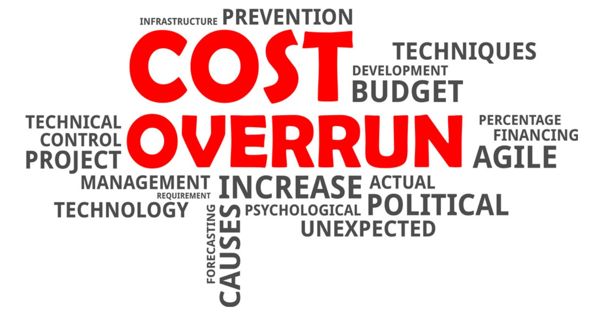 A cost overrun is the amount by which actual expenditures exceed the planned amount. It is also known as a cost increase or budget overrun, which involves unexpected incurred costs. These are common in large-scale projects, such as infrastructure and information technology projects. When these costs are in excess of budgeted amounts due to an underestimation of the actual cost during budgeting, they are known by these terms. It is the fact of spending more money on a project than was planned in the budget, or the actual extra amount that is spent.

Cost overruns are common in infrastructure, building, and technology projects. Besides the underlying nature of massive and complex projects, poor execution of project management leads to increased costs. For IT projects, a 2004 industry study by the Standish Group found an average cost overrun of 43 percent; 71 percent of projects came in over budget, exceeded time estimates, and had estimated too narrow a scope; and total waste was estimated at $55 billion per year in the US alone. A good project management team must be capable of identifying the possible sources of cost overruns early and mitigate their effect.

One major reason for cost overruns in most projects is design errors. Project design is the base of everything. It can be dangerous to project success since they imply that, for maintaining project activities, a firm has to spend funds intended for entirely other purposes at first. In order to execute a project, proper representation of the client’s requirement, as well as the blue print to achieving good technical input are required, which are both based on the project design. Many major construction projects have incurred cost overruns; cost estimates used to decide whether important transportation infrastructure should be built can mislead grossly and systematically. An unfeasible cost estimate is another common reason for cost overruns. Cost estimation is a vital part of a project, which goes hand in hand with the project design phase.

A cost overrun may occur for the following reasons:

Another common reason for budget overruns and schedule delays is failing to plan the available resources effectively. Cost overrun is distinguished from cost escalation, which is an anticipated growth in a budgeted cost due to factors such as inflation. Failing to estimate the resources that would be used during the project might lead to under assigning or over assigning resources to a task. This means an increase in the duration or a blockage, respectively.