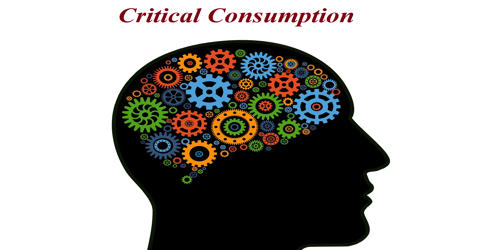 Consumption trends and the associated impacts on natural ecosystems are of universal importance and interest to countries in all geographic regions and income groups. Critical consumption is the conscious choice of buying or not buying a specific product according to ethical and political beliefs. It is the purchase or boycott of goods for political, ethical, or environmental reasons, is regularly characterized as an example of ‘new politics’ or ‘new’ political participation.

The critical consumer recognizes the importance of considering some characteristics of the product and its realization, such as environmental sustainability and respect of workers’ rights. A rudimentary definition of consumption emphasizes the purchase and use of goods or services, noting that the point of expenditure on such items and the instant of their usage constitute the act of consumption. Indeed, critical consumers take full responsibility for the environmental, social, and political effects of their choices. The critical consumer can sympathize with certain social movement goals and contributes towards them by modifying their consumption behavior.

Work on critical consumption has differed in the terms used to refer to boycotting and buycotting actions. The economic and social impacts are being felt by people everywhere, either directly in their daily livelihood or, less directly, in the form of higher prices and reduced quality of life. The more prominent include ethical consumption and political consumerism, while sustainable consumption, more linked with policy, has also increased in usage. Demand is being fueled in part by basic needs such as nutrition and literacy, not merely by “lifestyle” preferences.

Often consumers and citizens are considered as different because consumers only show self-interest, whereas citizens denote expanded self-interest. The general idea is that consumers buy what they want—or what they have been persuaded to want—within the limits of what they can get. In many cases, wasteful, inefficient, or short-sighted production and consumption patterns are putting at risk whole ecosystems, disrupting their normal functioning and reducing their potential productivity, now and for the future. Citizenship, on the other hand, carries duties or responsibilities along with various rights. Since consumers are seen also as citizens they have to behave in a community-oriented, moral, and political way, rather than as a self-interested one.