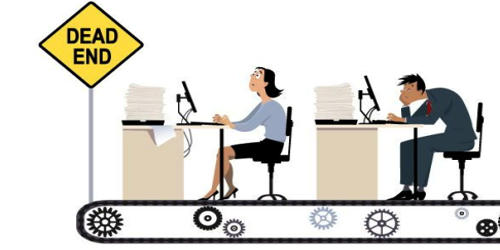 A dead-end job is a professional position with no prospects for advancement. It is a job where there is little or no chance of career development and advancement into a higher-paid position. It is a job in which there is no chance of progressing to a better, more important job. It is a job with no possibility of promotion, however hard you work. This is because they are simple jobs that require few skills. They are usually talked about by people who don’t like their jobs and/or don’t like their boss and/or don’t like their company. If an individual requires further education to progress within their firm that is difficult to obtain for any reason, this can result in the occupation being classified as a dead-end position. When someone doesn’t like any of these things they don’t feel happy to be working in that job so they call it dead end because they don’t believe there is anything good about where they are working. It is a job that has no potential for growth and no potential to allow the person in it to leave it without leaving the company.

A dead-end job is a job where you don’t see any future. It is a job which does not offer any opportunity for improving your situation. If you consider that a job is part of a career, and a career is a journey, then a job that does not progress that journey is a “dead end.” Based on human resources and career strategist Toni Howard Lowe, some individuals who have worked for the same company for several years may not be privy to the signs that they are currently employed in a dead-end job. Specifically, a job that does not progress you further in your career and/or has no growth potential is a “dead-end job.”

Identify what success means to you and think about your career values and your ideal work environment. These will help you learn what job options are really like and whether they will offer more professional growth opportunities. The term dead-end job is a way to describe work that doesn’t allow the employee to progress to a higher position. This idiom started appearing in the 1900s. However, the adjective phrase dead-end was already in use before that. In the late 1800s, a dead-end meant a street or passage that had only one entrance and exit. This meaning is still in use today.