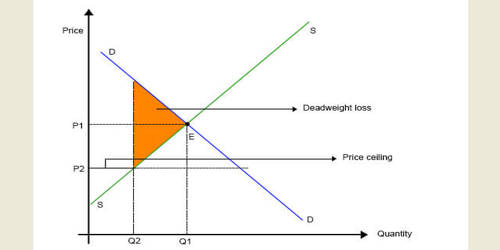 Deadweight loss is defined as the loss to society that is caused by price controls and taxes. A deadweight loss, also known as an excess burden, is a measure of lost economic efficiency when the socially optimal quantity of a good or service is not produced. It is a cost to society created by market inefficiency, which occurs when supply and demand are out of equilibrium. Non-optimal production can be caused by monopoly pricing in the case of artificial scarcity, a positive or negative externality, a tax or subsidy, or a binding price ceiling or price floor such as a minimum wage. Mainly used in economics, deadweight loss can be applied to any deficiency caused by an inefficient allocation of resources.

Deadweight loss occurs when supply and demand are not in equilibrium, which leads to market inefficiency. Assume a market for nails where the cost of each nail is $0.10. Demand decreases linearly; there is a high demand for free nails and zero demand for nails at a price per nail of $1.10 or higher. The price of $0.10 per nail represents the point of economic equilibrium in a competitive market. With a reduced level of trade, the allocation of resources in a society may also become inefficient.

There are three main causes of deadweight loss:

A deadweight loss is the result of inefficiencies in a market resulting from the poor allocation of goods and services. If market conditions are perfect competition, producers would charge a price of $0.10, and every customer whose marginal benefit exceeds $0.10 would buy a nail. A monopoly producer of this product would typically charge whatever price will yield the greatest profit for themselves, regardless of lost efficiency for the economy as a whole. Market inefficiency occurs when goods within the market are either overvalued or undervalued. In this example, the monopoly producer charges $0.60 per nail, thus excluding every customer from the market with a marginal benefit of less than $0.60. The deadweight loss due to monopoly pricing would then be the economic benefit foregone by a customer with a marginal benefit of between $0.10 and $0.60 per nail.

The deadweight loss of taxation refers to the harm caused to economic efficiency and production by a tax. Conversely, deadweight loss can also arise from consumers buying more of a product than they otherwise would be based on their marginal benefit and the cost of production. Deadweight loss is the loss of something good economically that occurs because of the tax imposed. For example, if in the same nail market the government provided a $0.03 subsidy for every nail produced, the subsidy would reduce the market price of each nail to $0.07, even though production actually still costs $0.10 per nail. Consumers with a marginal benefit of between $0.07 and $0.10 per nail would then buy nails, even though their benefit is less than the real production cost of $0.10. It is the excess burden created due to loss of benefit to the participants in trade which are individuals as consumers, producers or the government. The difference between the cost of production and the purchase price then creates the “deadweight loss” to society. Tax on a product alone is not the only contributor to deadweight loss.