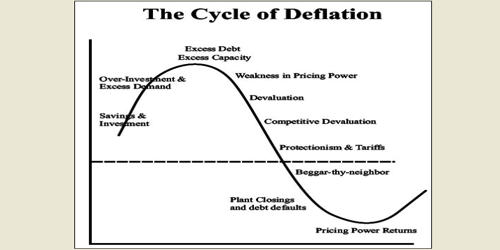 Debt is an important component of an economy that can help to stimulate growth for both consumers and businesses. Debt deflation is a theory that recessions and depressions are due to the overall level of debt rising in real value because of deflation, causing people to default on their consumer loans and mortgages. It is a theory based on the principle of the correlation between the debt burden and the price level in a country. It is a concept that pertains to the effects of debt on the price of properties, goods, and services. Deflation has the effect of significantly reducing the debt burden. It is a problem that can have lasting negative effects on a country’s economy. Conversely, a price increase leads to an increase in the debt burden.

When a country has economic growth, the confidence of economic agents (households, companies, the State, etc.) is high. Bank assets fall because of the defaults and because the value of their collateral falls, leading to a surge in bank insolvencies, a reduction in lending, and by extension, a reduction in spending. At the corporate level, this growth drives investment financed by debt. Borrowers will typically experience decreasing property values from debt deflation, which can lead to an array of other negative repercussions. The stronger the (GDP) growth, the more willing the agents are to go into debt. The mortgage market is one area highly prone to debt deflation since it encompasses a large portion of the total debt outstanding overall. If demand remains low, companies must adapt and reduce their costs. This requires a reduction in wages and numerous redundancies. Debt deflation, therefore, leads to an increase in unemployment.

The theory was developed by Irving Fisher following the Wall Street Crash of 1929 and the ensuing Great Depression. The Debt-Deflation Theory of Great Depressions, in which he devised a theory on why economic recessions occur and how a country’s debt burden can affect price levels. The debt-deflation theory was familiar to John Maynard Keynes prior to Fisher’s discussion of it, but he found it lacking in comparison to what would become his theory of liquidity preference. Deflation is self-sustaining and that is why it is very difficult to get out of it.

The theory of debt deflation is a macroeconomics concept pertaining to rising debt levels and their negative impact on the economy. The theory, however, has enjoyed a resurgence of interest since the 1980s, both in mainstream economics and in the heterodox school of post-Keynesian economics, and has subsequently been developed by such post-Keynesian economists as Hyman Minsky and by the mainstream economist Ben Bernanke. In the broad market, debt deflation generally refers to a theory that identifies total outstanding debts as a catalyst for price decreases across a country’s economy.